A business dream becomes a reality 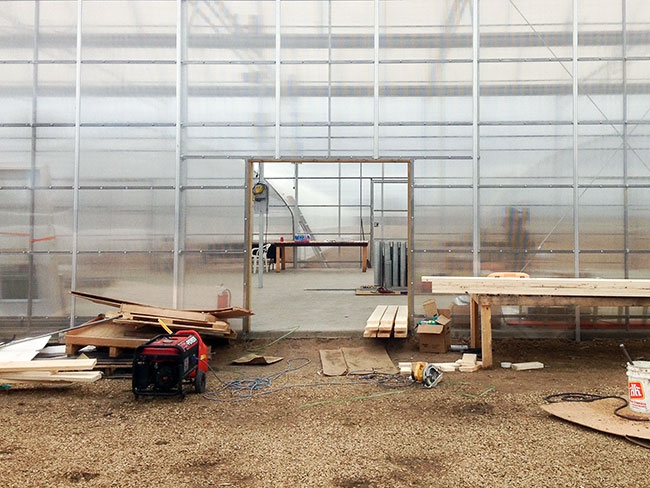 DECEMBER 2016 – It became very clear in May 2012 that I was meant to start a greenhouse with my husband Tanner. Even though I had graduated from Olds College with a diploma in production horticulture seven years earlier, building a greenhouse was not a dream I ever thought would happen. In fact, I had convinced myself after graduating that owning a greenhouse was going to be impossible.

Ending up in High Prairie, Alberta (located in northern Alberta) was never my plan, but it was the best thing that ever happened because it created the biggest opportunity of my life (so far). In the early spring of 2012, it was like all the pieces clicked together.  There wasn’t a greenhouse within an hour of town and we happened to live only two kilometres from High Prairie. No one had started or operated a seasonal greenhouse for years and I had a background in horticulture. I had heard repeatedly from locals about how nice it would be to have a greenhouse near town.

And here we lived just off the main highway and had access to good roads. Click! It all made sense!

At that moment, Tanner and I began our research into building and opening our very own greenhouse.

We knew it would take a lot of homework, study and planning. We developed a game plan.

Finally by the end of 2012, after more then six months of research, tours, interviews with contractors, and planning  (gathering quotes and estimates), we went into FCC with our completed business plan, cash flow projections, and financial statements.

This was the beginning of a new and interesting life. We could feel it. We will look at the launch of our business in the January edition. Stay tuned!

Christie and Tanner Pollack are owners of Christie’s Gardens and Greenhouses, located near High Prairie, Alberta, one of the province’s newest garden centres. Christie was named one of this year’s Top 10 Under 40 award winners by Greenhouse Canada.