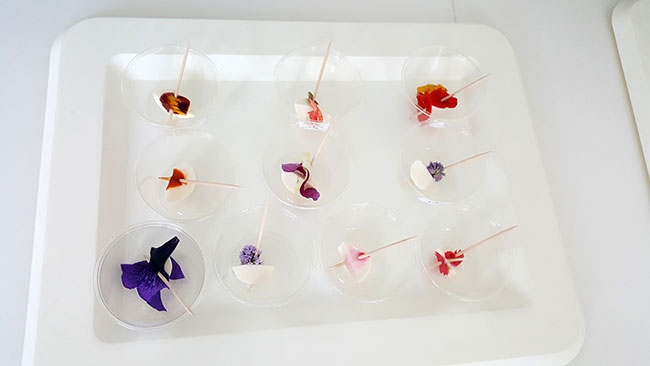 Floral flavours are the number one consumer food trend for 2018 according to Whole Foods Market. For years, professional chefs have been using edible flowers as garnishes or to give dishes a signature flavour. Rising consumer interest in food culture has dramatically impacted mainstream media and grocery trends.

Today, consumers are seeking out new culinary experiences and experimenting with untraditional ingredients. To tap into this trend, Freeman Herbs is partnering with Vineland Research and Innovation Centre (Vineland) to investigate consumer preferences for edible flower varieties and their positioning in the marketplace.

Edible flowers are surging in popularity as evidenced through research conducted by Alexandra Grygorczyk, PhD, Vineland’s Research Scientist, Consumer Insights. “In 2015, we surveyed consumers on their preference for edible garden plants (e.g. blueberries, raspberries, gooseberries) and also included an edible flower option in the study,” said Grygorczyk. “We found 35 per cent of respondents were highly interested in edible flowers and would prefer purchasing edible flowers for their garden over more traditional plants such as raspberries and blueberries.”

Based in Beamsville, ON, Freeman Herbs, Canada’s largest herb producer, partnered with Vineland in 2017 to gain a better understanding of the edible flower market. Freeman Herbs conducted production trials on over 25 types of edible flowers screening for ease of production, blooming and a compact shape for container production. Ten plants were selected for evaluation by Vineland’s trained sensory panel to discern their taste profiles before testing for preference with over 200 Greater Toronto Area herb-purchasing consumers.

Study participants were presented edible flowers on a piece of bocconcini cheese and asked to indicate how much they liked or disliked each sample. “We were able to segment consumers in two groups: the bold flavour fans (56 per cent) favouring strong aromas and spicy tastes; and the smooth texture lovers (44 per cent) preferring smooth textured and subtly flavoured flowers,” said Grygorczyk. The two segments indicated the opportunity to reach a larger customer base by releasing a line of edible flowers with products catering to different consumer palates. Results showed edible flowers such as nasturtium and candy pop mint should be marketed to the bold flavour fan group while impatiens and dianthus are of interest to the smooth texture lovers.

Following taste tests, participants were invited to complete a questionnaire on purchase habits and demographics. Nearly 60 per cent said they had previously eaten edible flowers, with flowers in a salad being the most common format (about 40 per cent of respondents). However, edible flowers can also be used in home-made popsicles, cocktails, cupcakes, ravioli, or even sushi. When do consumers plan to use edible flowers? If allowed to choose only one preferred occasion, the majority (54 per cent) indicated they would use edible flowers to impress their guests at dinner parties, particularly during spring or summer.

“These research findings have been instrumental in outlining our business plan to expand into the potted edible flowers market,” said Jeff Nickerson, general manager of Freeman Herbs. Freeman Herbs will be launching a line of edible flowers in four-inch pots in the produce aisle in 2019.

What’s next? Freeman Herbs is now focusing on an effective strategy for product positioning informed by an upcoming online consumer survey Vineland will launch this summer.