With cannabis on the scene, are a significant number of Canadian greenhouses abandoning floral and food production? 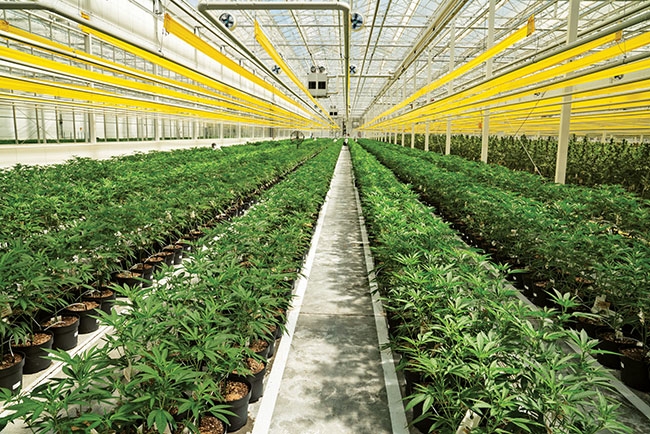 One of Canada’s largest licensed producers, Aphria employs 480 people across Canada and this number continues to grow.

As everyone in Canada is aware by now, recreational cannabis has become legal. But the full effects of legalization on the Canadian greenhouse flower and vegetable industry remains to be seen.

For starters, some growers have switched part of their production to cannabis, partnered with cannabis firms or sold out completely, but others are expanding their existing vegetable or flower production. The net gain or loss in the long run is anyone’s guess.

In ornamentals, Flowers Canada Growers (FCG) reports that very few growers have transitioned to cannabis production, but some have instead sold their businesses to new cannabis ventures. “It makes more sense to sell to someone ready to invest and take on the risks involved with cannabis,” explains FCG Executive Director Andrew Morse. “The competition is strong. In Ontario, I would say about 8 to 10 flower growers out of 184 have sold to cannabis firms. Most of that transition took place about a year ago and things have slowed down dramatically.”

This decrease in flower production has meant it’s been a bit harder this year for some retailers to find certain products, says Morse, but he points out that this has put some producers in good positions for negotiation and pricing. In his view however, the rapid growth of the cannabis sector has negatively impacted some flower growers. “It creates competition for labour, for equipment, for construction if you want to expand,” he notes. “Labour is the one that’s really tough. It makes the available labour force even smaller.” Morse adds that the odour of cannabis production has caused concern in some areas of the country, with some negative feelings extended towards the entire greenhouse industry.

On the vegetable side, Ontario Greenhouse Vegetable Growers’ marketing & economic policy analyst Glen Snoek also lists labour as a concern. He reports that “there was already a lot of competition for qualified greenhouse operators and personnel in this industry, and the rise of the cannabis industry has made it more acute.” However, the greenhouse vegetable industry in Ontario has been in a construction boom for quite some time and this is likely to continue; Snoek says construction firms are booked solid for the next two years. Some cannabis firms, he reports, are therefore having to approach existing facilities and form partnerships to establish themselves in the industry.

In B.C., acreage of vegetable production has decreased from 850 to about 750 over the last year, due to conversion of existing production to cannabis. One producer sold one greenhouse to a cannabis firm (keeping the others in vegetable production), another has converted one facility to cannabis production in cooperation with a licensed producer, and yet another has converted completely to cannabis production. “This is what I know at this point,” says Linda Delli Santi, executive director of the B.C. Greenhouse Growers’ Association. “Probably every greenhouse vegetable grower in this province was approached by cannabis firms wanting to buy, and further sales or conversions from veggies to cannabis may have happened during this year. It’s an opportunity to get a better return. The margins are tight for greenhouse vegetable producers, and if they see an opportunity to switch to something that realizes a better return on investment, they will.”

There’s a new ALC (Agricultural Land Commission) regulation in B.C. however, that’s negatively affecting the cannabis industry construction. The Ministry of Agriculture has given municipalities and First Nations the ability to refuse the building of new cannabis facilities with cement floors, a move that addresses strong concern that agricultural land is going to be “cemented over” by cannabis firms. Delli Santi believes this may have stopped the building of some cannabis facilities; she’s heard that some cannabis companies don’t seem to think growing cannabis on dirt floors is desirable or even possible, although almost all vegetable greenhouses have mainly poly-covered dirt floors. So far, Richmond is the only municipality that has enacted a ban against cement-based agricultural buildings.

“I think it was an attempt in Richmond to slow things down and start a conversation about cannabis production,” Delli Santi says. “I don’t think there is any certainty yet about how much cannabis production will be needed to meet demand, and people are concerned the growth will be out of control. There are also concerns about losing food production. It’s true that cannabis producers are building new facilities, but they are also buying greenhouses and warehouses. And at the same time, they are taking experienced growers from our sector, especially those with advanced education.”

Delli Santi sees no positive implications of cannabis for her sector, except that vegetable growers in B.C. who wished to sell their facilities over the last year have been in a good position to do so.

Cannabis industry training
Some of the labour needs of the cannabis industry are being met through new training programs at Canadian institutions, including hands-on programs at the Collège Communautaire du Nouveau Brunswick. Some are for working professionals and post-graduates, such as the part-time program at Durham College in Ontario and a series of online cannabis career training courses from Kwantlen Polytechnic University in Surrey, BC.

Niagara College in Ontario launched its Commercial Cannabis Production Program in September, with 24 students chosen from about 300 applications; the college is now reviewing applicants for January intake. “It’s an eight-month program with three intakes a year,” says program coordinator Bill MacDonald, who was previously coordinator of the college’s Greenhouse Technician Program. “It’s a graduate program for our greenhouse program graduates, or graduates of a college horticultural program or university science program. The enrollment of our hort and greenhouse program has increased substantially since those wishing to do the cannabis program must go through that first.”

He notes, however, that only two of the recent greenhouse program graduates applied for the cannabis program as the rest of the graduates from last spring are already employed – mostly in the cannabis industry.

One of Canada’s largest licensed producers, Aphria employs 480 people across Canada and this number continues to grow.

From the cannabis front
Aphria, one of Canada’s largest licensed producers, currently has 480 employees across Canada, including 120 greenhouse positions, and this number continues to grow. Co-founder Cole Cacciavillani explains that the company started as CF Greenhouses, where his family produced seasonal potted plants for over 50 years. “We purchased our first greenhouses from CF Greenhouses, which gave us access to 360,000 sq. ft. of greenhouses on 36 acres of land,” he says. “Since then, we have expanded the Leamington, Ontario campus (over 90 per cent of current production)…We have also acquired adjacent properties to assemble land exceeding 65 acres and increase our infrastructure and greenhouse footprint to 1.5 million sq. ft. Aphria has also partnered with nearby greenhouse vegetable grower Double Diamond Farms to grow cannabis at Double Diamond’s newly-constructed 1.7 million sq. ft. greenhouse.

Another joint cannabis venture in Leamington is between Peter Quiring (of NatureFresh Farms) and Auxly Cannabis Group. According to a release, they plan to build and operate a 1.4 million sq. ft. greenhouse designed for cannabis production.

In the Niagara area in Ontario, Up Cannabis has purchased a 200,000 sq. ft. facility and is currently expanding it to more than double the size. The firm also has a small warehouse growing facility in Brantford, Ontario. “The previous owner of our Niagara facility (Westbrook Greenhouse Systems) used to grow orchids,” says Up Cannabis’ chief operating officer Kevin Epp. “[Westbrook] has been an excellent resource for us as we transitioned ownership of the facility. Westbrook has also been contracted to build our greenhouse expansion.”

Epp says that creating jobs and keeping the original greenhouse jobs in the Niagara region is a “definite positive for us, and of which we are very proud. The Niagara facility, when completed, will employ almost 200 people. Those who previously worked in our greenhouse when it grew orchids have stayed on and bring us transferable skills.”

In the end, whether cannabis is seen as a positive or a negative for Canada’s ornamental and vegetable greenhouse industry is a matter of perspective. For greenhouse workers, it offers more opportunity and career security. For greenhouse owners, it presents competition for labour, but also provides new and lucrative business opportunities and a great exit strategy. For his part, Epp points out that using many local companies in Up’s supply chain helps support the existing greenhouse industry. He adds that “we expect some technological advances we are making will percolate into vegetable and/or floral producers, making the entire industry more competitive.”