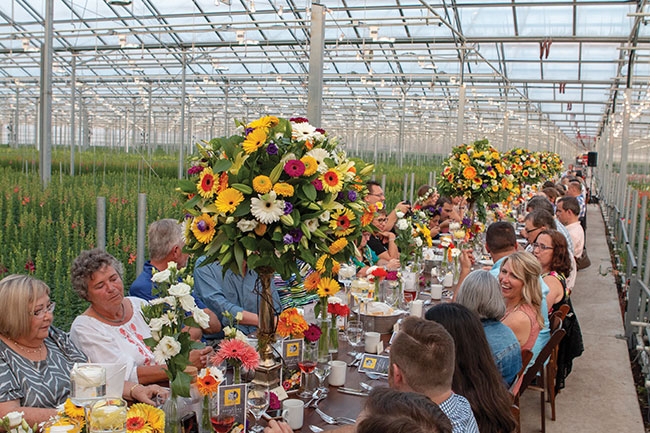 What could be better than savouring smoked lake trout in cracked mustard dressing at a table surrounded by row upon row of deep pink and warm orange gerberas? Add a lounge singer, a bar full of local drinks, enthusiastic company and flower crowns; you have a night to remember.

“It’s kind of like going to a wedding, except nobody gets married,” says Dejan Kristan describing Petals & Plates, a series of dinner events that highlight Canadian flower growers. Kristan, marketing director of Flowers Canada (Ontario) (FCO), says when he and marketing coordinator Jess Gough started their roles, their brainstorming led them toward experiential marketing – and eventually Petals & Plates.

Kristan says it seemed like the logical choice over advertisements, billboards and other similar marketing avenues. “With the younger generation, millennials specifically, it’s all about experiences […] and flowers are all about how they make you feel,” says Kristan. “You’re buying a feeling.”

An experience is right. Starting with a cocktail reception and live music, guests are invited to make their own flower crowns as demonstrated by a local florist. The evening continues with a tour of the greenhouse, where guests are encouraged to ask any questions they have about the industry. Finally, the evening is concluded by a four-course dinner and introductions from the chef.

Cultivating the next generation’s love for flowers
The first Petals & Plates was held at Rosa Flora in September 2017, with three others since then at CosMic Plants in Lincoln, Van Geest Bros in St. Catharines and Creekside Growers in Delhi. While the event is attended by people of all ages, they are starting to see more interest from the younger generations, which Kristan says is a great sign as the industry continues to develop the next generation’s relationship with flowers.

“There’s a lot of gardeners, there’s a lot of flower lovers in the older generation,” he says. “But part of the fear is the newer generation, the millennial generation; they don’t have the same relationship with flowers.” Petals & Plates is one way to get people looking at flowers in a new light.

For example, there’s the flower crown bar during the event. “It’s not your classic flower crown that you’re thinking of that has 100 flowers and maybe some fruit in it,” says Kristan. “These are very subdued.” People are keen to wear them as fashion accessories.

Demonstrating the relevancy of floriculture is not the only goal of Petals & Plates, however. “There’s a lot of misconceptions with the industry,” says Kristan. By inviting people to see how flowers are grown and brought to the marketplace, Petals & Plates provides a venue for greenhouse operators to clarify misconceptions and instill pride in the industry. “Allowing people to come see what goes on in these greenhouses goes a long way to dispelling those rumours,” he says.

According to Ed Vermolen, sales manager at Aldershot Greenhouses and volunteer member of the FCO marketing committee, Petals & Plates is the perfect opportunity to be a passionate flower ambassador. “With folks I meet, I will ask them, when was the last time you got or bought flowers, what were they and why [and] how did that make you feel,” says Vermolen, who had a hand in developing Petals & Plates. “When you tie those together, they get it.”

He hopes the event will highlight how flowers and plants contribute to daily life by enhancing it, improving the work environment, adding to people’s creativity and energy, as well as minimizing stress. Besides how they make you feel, flowers are also an effective communication tool. “Flowers exude happiness, joy, offer condolences, congratulations, say I love you, and say I’m sorry,” says Vermolen.

Adding flavours to fragrance
Petals & Plates not only shines light on the flower industry, but it also brings other aspects of agriculture to the table, so to speak. By partnering with other agricultural commodities, the event is able to include food that is supplied from local sources. “We want to showcase the freshness and variety of all Ontario agricultural products,” says Gough. Even the bar is stocked with local flavours.

There’s perhaps no one who brings out these flavours more than Jan-Willem Stulp – ­or simply “Chef” as the event organizers call him. Stulp, executive chef at Grand Oak Culinary Market in Vineland, has worked with FCO from the outset on this event. With over 20 years of experience as a chef, Stulp sees the importance of giving people a dining experience.

While he’s been part of the collaboration process to develop the concept of the event, one of his main tasks is creating the menus. Given the venue, there are many specific considerations that need to be made beforehand. “It needs to be classy enough to be memorable, but we have to execute the menu out of a loading dock,” he says. “So it takes some pre-thought, and lots of ingenuity and flexibility.” The challenge is also what makes it fun and unique, he adds.

With the chef present, guests get a behind-the-scenes glimpse at the culinary process. Stulp introduces each course, sharing some background behind the food on the menu and how each dish is made.

The chef sees gourmet food as simply another way to bring floriculture to light. “The core of most meals is built around plant-based materials: vegetables, starches, salads and even wine,” he says. “Many foods, especially fruit, are the result of floral success.” According to Stulp, it’s also not uncommon for flowers to be part of a meal. This is evident in his past menus that have included items such as organic baby greens with floral petals as a starter or lavender and wild ginger syrup on baked apple and quince ‘tatin’ for dessert.

Opening greenhouse doors to the public
The event itself is a reflection of another growing trend in agricultural advocacy. According to Gough, it’s becoming more prevalent for farmers to pursue transparency and industry support by inviting the public to come and see their operations firsthand.

The results? Other than increased awareness for the industry, Vermolen says some guests at the Rosa Flora dinner were able to see a production greenhouse for the first time. “When they saw the gerbera house, it was like a magical moment,” he says. “They were so happy they were speechless.”

The event is also good bang for the buck. Kristan says he’s asked guests whether they think they’re getting a good return on their ticket. “A lot of them say, ‘If we were just to get a four-course meal in downtown Toronto, we would probably be paying more than we are here,’” he says. With ticket prices averaging out around $100, it’s a small price to pay for a full evening event that includes a four-course meal.

The budding enthusiasm of growers
It’s not just the guests who have such a positive experience at these dinner events. Since growers are accustomed to seeing their greenhouses every day, Kristan says the event allows them to see 200 metres of blooming gerberas through the eyes of someone who’s never seen that before.

Gough agrees that it gives the growers a boost. “They love seeing the smiles, the amazed faces on the guests when they walk in and see the product of all their hard work,” she says.

Arielle DeBoer, co-owner of Rosa Flora with her husband Ralph DeBoer and brother Josh Bulk, says they jumped at participating in the first dinner event because they saw it as a great opportunity to promote their business and the industry. While it takes coordination to make sure the dinner is hosted during a time that would showcase the flowers and work within the schedule of the greenhouse operation, it’s worth the effort. “I personally felt that people appreciated the whole event as well as us as a business,” says DeBoer, who is hosting their second Petals & Plates dinner in early March.

Given the success of the dinner series in the past year, there’s another dinner planned at Waldan Gardens in late March – ­with plans for more. FCO is also discussing the possibility of taking the event to a national level, starting in British Columbia.

As Kristan says, loving flowers is not a requirement for enjoying this event. Petals & Plates is a fun event with something for everyone. That said, he’s never met anyone who says they don’t like flowers.

“People are better with flowers,” says Vermolen, “in the garden, in the house, in their life.”