In addition to field production and a retractable-roof greenhouse, these cut flower specialists (Oriental lilies, viburnum and hydrangeas) also have five rolling greenhouses, representing half the total number of such units in all of Canada. 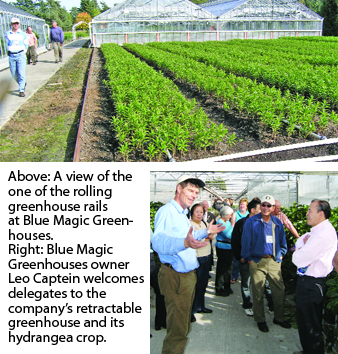 The day concluded with a tour of Blue Magic Greenhouses. Leo and Ineke Captein established the company in 1981, and it has grown to 10 acres of production and five employees.

“We try to be a low-cost producer with a high-quality product,” Leo said. “Quality always prevails.”

In addition to field production and a retractable-roof greenhouse, they also have five rolling greenhouses, representing half the total number of such units in all of Canada.

Blue Magic applies very few chemicals, as their emphasis is on as much organic cultivation as possible. The major crops include Oriental lilies, viburnum and hydrangeas.

Lilies are the biggest crop, with about a half-million stems produced each year. The outdoor quality is so much better than indoor crops, said Leo. The plants are especially hardy. The crop, however, is labour intensive as it is all hand-planted.

The hydrangea crop is grown just about completely biologically in the retractable roof greenhouse. The soil is quite fertile, Leo explained, with no requirement for fertilizer applications the past few years. Their goal is to achieve 30 to 40 flowers per square metre, and they’re close to achieving those levels. Heaters have been added because a February cold snap could freeze the buds. “The market is growing,” he said, with only a handful of growers involved.

“The biological controls work quite well. With the open roof, we get a lot of biologicals from outside.” A consultant regularly scouts the crop. Spider mite is the biggest problem.

“We try to schedule year-round work, with no real peaks and valleys.”

Helping the Capteins achieve that consistency are the rolling greenhouses. Among crops grown with this system are viburnum and lilies. “Most of the time the crop is outside.”

It only takes about 30 minutes to move the greenhouse. The first one was installed in 1982. Each of them is 6,000 square feet, and since they move up and down the fields, they can cover five acres during the year. “Our goal is to keep them full.”

Since the greenhouses are moved, there is no need to steam or otherwise sterilize the soil as the cold weather keeps things in check. “It gives the soil a natural break.” However, the soil is regularly amended with composted organic matter derived from such materials as bark, bulbs and different manures to help maintain the organic balance.

Rolling greenhouses are more expensive to buy, as they’re built stronger to withstand the strains of rolling on their rails – pulled by an electric winch – from crop to crop. But they’re a key factor in the success of Blue Magic Greenhouses. They extend crop production earlier or later than the traditional field production seasons, allowing the Capteins to serve the market when prices are high.

Rolling greenhouses work well in B.C. “You have to have a moderate climate,” said Leo. “If you go from a real cold winter to a very hot summer, there’s no point having them.”

Related
FROM THE EDITOR: December 2006
Appraisal forms helpful with productivity
Is industry attracting enough young scientists?
From the Editor: March 2011