Features Biocontrols Inputs
Banking on bankers: Rearing the next generations of beneficials

Banker plants can boost a population of beneficial insects - but only when it’s done right. 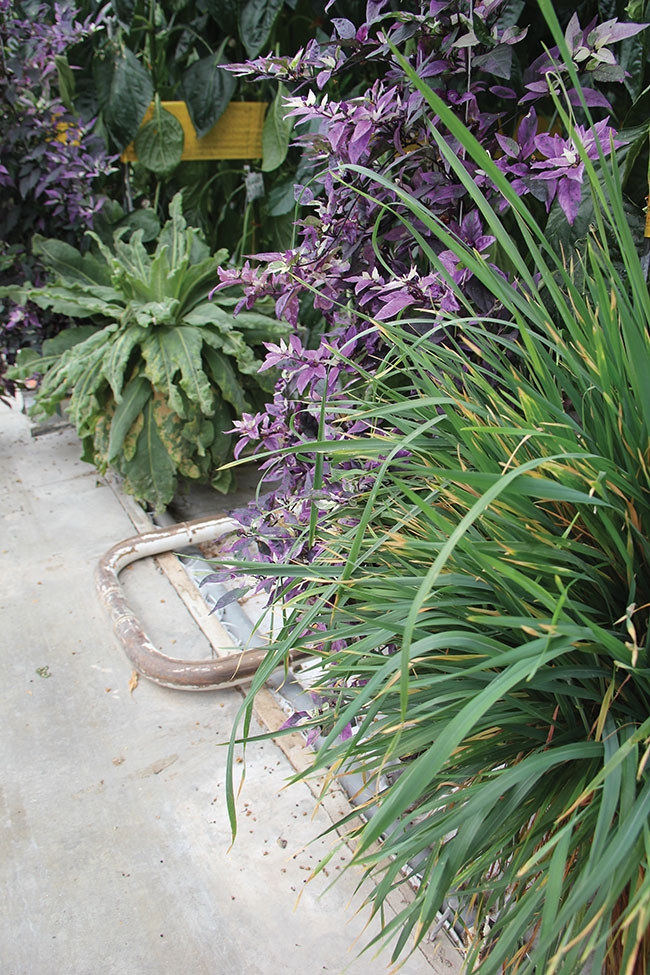 Walking into the Orangeline Farms greenhouse, you’ll notice a myriad of purple and green foliage at the ends of some rows. But they’re not any one of the 20 different bell pepper varieties that the greenhouse operation grows.

The purple plant is an ornamental pepper known as ‘Purple Flash’. The pollen provides food for Orius, explains Soltaninejad. The minute pirate bug is a beneficial insect that will consume all the mobile growth stages of thrips, as well as other soft-bodied insects like aphids.

“Thrips are one of the main issues in the area,” says Soltaninejad. But Orius also needs 12 to 13 hours of daylength to establish, he adds, so it only works during certain times of the year, unless supplemental lighting is provided.

Also seen at the ends of some rows, Soltaninejad points out the mullein they use for rearing Dicyphus as a generalist against white flies, spidermites and broad mites. There’s also a combination of wheat, rye and barley plants for their aphid banker system.

The cereal banker plants are designed based on non-harmful aphids to our pepper crop, he explains. In fact, they house cereal aphids, Rhopalosiphum padi used to help rear the beneficial parasitic wasp Aphidius colemani, which lays eggs inside these aphids. A. colemani would then move onto harmful species in the crop, such as the green-peach aphid.

For the first-timers
“Most people start with the aphid banker plant program because you can buy this banker plant. The other banker system growers have to grow the plants themselves. You only need a couple of plants depending on density and pest pressure, between two to four per acre,” says Suzanne Wainwright-Evans, owner of Buglady Consulting.

“It’s about building higher and healthier populations,” says Wainwright-Evans, “because any biocontrol agent coming out of the bottle can be stressed.” With aphid parasites, as soon as they emerge from their mummies, the adults really need to start feeding and they need to find places to lay their eggs very quickly. “If you’re in a bottle, that’s really hard to do.” If they are breeding in your greenhouse, they can get right to work and not have to wait to be released from a bottle. By the time commercially reared parasites reach the greenhouse, they’ve been bred in an insectary, placed into a bottle and transported overnight, often already emerging in the bottle. “It’s just better to build your own breeding population if you can.”

Timing is everything
One of the key pitfalls Wainwright-Evans has seen this season is that growers sometimes forget that banker plants will not control all species in a particular order. For instance, A. colemani targets the peach and melon aphid, but not the potato or foxglove aphid.

Because banker plants aren’t part of the regular crop irrigation, most programs fail from the lack of banker-plant watering. They’re usually hanging on other poles and other places, and they don’t get watered, she says.

Timing is another key aspect. It’s great when growers do it right, says Wainwright-Evans, but if they miss their window to start their plants, then things go off track. “With certain programs you start the plants and you have them for months,” says Wainwright-Evans. “But when you look at an aphid banker program, you know you’ve got to constantly re-sow and restart those every few weeks.”

It’s also about anticipation. As Wainwright-Evans explains, the peppers should be blooming by the time Orius is released. “You typically want a month of reproduction of the Orius on the plants before you expect your thrips to show up,” says Wainwright-Evans. The idea is to have an unnaturally high level of beneficials right when the pests appear. After all, biocontrol is about prevention. “Once you have a massive pest problem, trying to clean up with biocontrol is very difficult and very expensive to do,” she adds.

Soltaninejad agrees. “The key factors to having a successful banker system are timing, balanced initial population of prey and predators/parasitoids and maintaining the system.”

Commitment required
You have to be into bugs to think this is cool, says Wainwright-Evans. It’s an opportunity for growers to learn about the different life stages of beneficials and it helps with their scouting.

“Yes there will be some upfront costs,” she says. Banker plants will take up space and time – which means money needed to manage them. But looking at the overall costs through the year, there are savings to be had.

Some banker plants like the ornamental pepper are used in the spring and summer, then discarded. Others, like the aphid banker plants have to be replenished. “The aphids get eaten all off the plants because the parasites are so efficient,” Wainwright-Evans explains. “You have to keep reintroducing aphids out there, and the grasses don’t last long.” But with just a couple plants per acre, it’s more manageable, she adds.

“Barley seems to be a pretty good one, because you can rear a lot of aphids on it,” she says of the aphid banker plant. “But if it gets tall, it falls over, and then the aphids and the parasites can’t get to them.”

One thing Wainwright-Evans stresses is that banker plants are not for everyone. “You have to evaluate your growing system and see if they are right for you and what you’re doing,” she says.

How do you choose?
There are some neat banker plant systems being developed in university trials, but what works in one area of the country may not work in another. Plus, they’re not all economically feasible for a commercial growing operation.

“There’s lists of banker plant programs,” says Wainwright-Evans. “People talk about using oleander with oleander aphids, but where are you going to buy oleander aphids from?” Some systems are not readily available on the market.

With new information on banker plants every day, and practices that differ based on the growing region, things can get overwhelming. An experienced consultant or technical support representative from a biocontrol company can help outline the steps needed, including the density of plants, the date of planting, when and what biologicals to release, what supplements to use, and more.

“Pest complexes can be different for each growing facility, and so we’re tweaking and learning as we go on how to make these systems work better,” she says.

For Orangeline farms, Solaninejad says they’re adjusting their regiment based on the severity of pests. “We would probably try the same systems with a little bit of adjustment in timing and substrate for our banker plants,” he says, “and since whitefly is not a big issue in pepper production, we would not continue with [the] mullein system.”

What’s next?
Coming on the past couple of years, the mullein for Dicyphus is a bit of a new system, says Wainwright-Evans. But part of the problem is that it works too well. “That’s why you’ve seen the production of Dicyphus get passed around between the insectaries so much,” she says “because you can establish Dicyphus so well on the mulleins.”

Cannabis is a whole new ballgame. “We’re still trying to figure out all the complexes, all the different pests that are in cannabis, and even if banker plants will work in this system. In the US, some states prohibit the use of banker plants in cannabis,” Wainwright-Evans says. “Every week we’re finding a new pest in it, in indoor and outdoor production.”