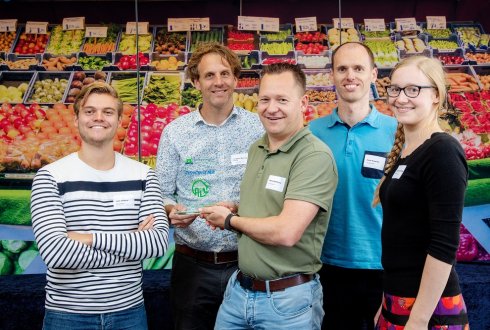 A winning team emerged from the second edition of the Autonomous Greenhouse challenge at Wageningen University & Research (WUR) in Bleiswijk earlier this month.

The winner of the challenge is team Automatoes, a team consisting of employees, researchers and students from Van der Hoeven Horticultural Projects, Hoogendoorn Growth Management, Keygene and TU Delft. This was announced in June during a public webinar with about 560 participants from all over the world organized by GreenTech. The entire Webinar can be viewed on the GreenTech website.

In a span of six months, five international teams grew cherry tomatoes “Axiany” remotely using their own AI algorithms. In the challenge they mainly competed against each other. In a reference greenhouse, the crop was grown by a group of Dutch growers. The growers were allowed to enter their greenhouse compartment, at least until the outbreak of COVID-19, afterwards a lot of communication took place with one of the WUR growers responsible for the greenhouse compartment.

On December 16, 2019, the young tomato plants were planted in the greenhouse. A few days later, control of greenhouses and crop was taken over by the teams remotely from their own countries. The last tomatoes were harvested on 29 May 2020 and all data were analyzed.

Each team had its own high-tech greenhouse compartment of 96 m2. Each greenhouse compartment was equipped with the same equipment (ventilation windows, two screens, two heating systems, CO2 dosing, a mix of SON-T and fully controllable LED lamps, substrate cultivation) and with standard sensors also available at commercial growers (temperature measuring box, moisture, and CO2). Information about PAR light, irrigation, drain, EC, substrate temperature and humidity were also shared. In addition, teams could place their own sensors at the start of the challenge. Every team did that. The choice of sensors was diverse, such as RGB cameras, thermal cameras, different substrate sensors, PAR sensors at various heights, pyranometers, sensors for stem thickness, sap flow or weight of the crop.

The main criterion for the assessment of the teams was the “net profit” of the cherry tomato cultivation during 6 months (50% of the points). High production with high quality led to higher revenues. Here, it was important to make a good trade-off between more kilos and better quality (Brix), which resulted in higher prices per kilo. In addition, the use of resources (heat, electricity, CO2, water, nutrients) did not only lead to lower costs, but also to higher sustainability. Additional points could be obtained for the “sustainability” criterion (20% of all points). The last 30% of the points could be achieved by the teams’ own AI strategy. An international jury has assessed whether the AI strategy was autonomous, innovative, robust and scalable.

Team Automatoes won the challenge. They achieved the highest net profit, namely € 6.86 per m2. But they also scored best in terms of sustainability with using the lowest amount of energy and water, however with an average CO2 consumption. Because the jury also rated their AI strategy as the best, they achieved the maximum number of points in the competition, namely 50.


Related
Ownership change for Gryphon Automation
Smarten up your farm with the Internet of Things
What’s ‘next generation growing’?
Floriculture’s future: Efficiency, sustainability and ease