Business Management
AN OVERVIEW OF THE RUSSIAN INDUSTRY

Pricing pressures and energy costs among growers’ concerns, notes Alexander Tsydendambaev, a longtime industry analyst. Times are tough, so much so that, “the children of the owners of greenhouses do not follow their parents in this business.” 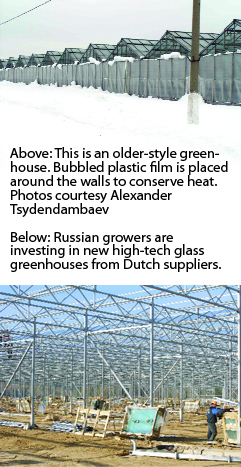 Alexander Tsydendambaev, editor-in-chief of GreenhouseLand magazine in Russia, toured Ontario a few years ago with a pair of Russian growers as part of their visit to the Canadian Greenhouse Conference. He recently updated us on the status of the greenhouse vegetable industry in Russia.

Tsydendambaev says there is considerable growth potential, as average consumption of cucumbers and tomatoes in Russia is much lower than nutritional recommendations.

He says the industry lacks direction, as neither the government nor the growers have shown much interest in improving the industry’s administrative and marketing infrastructure. “There is no coordination of the most sensitive items, such as trade rules or energy costs.”

And with little government attention or support, the sector is shrinking. The total glasshouse area in Russia in 1997 was 2,400 hectares.

He notes that while taller and more high-tech greenhouses are now being built, the pace of replacing older greenhouses is slow. There are only about 10 to 15 hectares of new construction each year.

Vegetable prices have been rising, he said, but not steep enough to match the country’s 11 per cent inflation rate, along with rising of energy and labour costs.

While agriculture has been given more attention by the Russian government, farm officials haven’t shown much interest in the greenhouse sector. It’s not surprising, notes Tsydendambaev, “that the children of the owners of greenhouses do not follow their parents in this business.”