News
An ‘exceptionnelle’ award for horticulturist 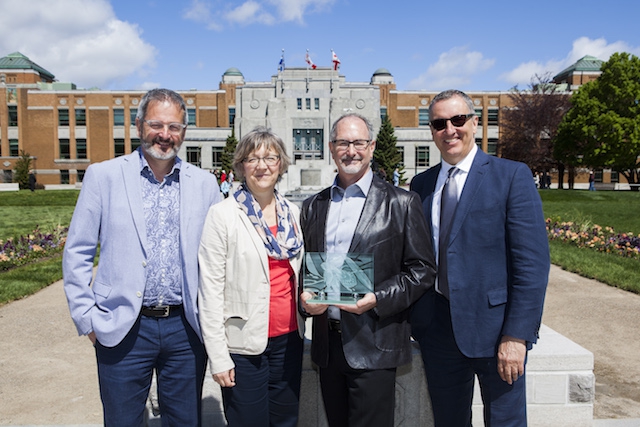 This prestigious award salutes the winner’s exceptional contribution to the advancement of ornamental horticulture in Quebec.

Vallée is recognized by his peers in the Quebec and international horticulture industry for helping to advance ornamental horticulture over more than 25 years. He has shown an exceptional commitment to horticulture and biodiversity through all his endeavours in the fields of teaching, research, technological innovation and publishing.

Vallée sits on the boards of the Société québécoise de phytotechnologie and the Daniel A. Séguin garden. He has worked with the ITA Centre d’innovation technologique en horticulture on numerous ornamental horticulture projects and has had over 100 articles published in professional magazines.

Vallée works in the field, innovating, teaching and building awareness of the need to protect biodiversity and foster sustainable urban ecology for the well-being of our communities, today and in the future.

He advocates a more holistic approach to agriculture and horticulture, one that puts plants at the heart of sustainable development. In his words, this cutting-edge approach requires us to recognize plants’ major role and their benefits for the environment and the health and well-being of our communities.

In this respect, Vallée is a leader among the professionals working to develop and promote new approaches advocating an updated, broader role for horticulture.

As a trailblazer in this new way of seeing our relationship with plants, he is involved in teaching and developing agriculture and urban phytotechnologies at the urban agriculture laboratory (TechnoLAB) on the Saint-Hyacinthe campus.

AWARD A TRADITION SINCE 1999

Henry Teuscher, a visionary and passionate horticulturist, botanist and landscape architect (1891-1984), designed the Montréal Botanical Garden. He worked closely with Brother Marie-Victorin, and was responsible for designing several of the exhibition greenhouses and putting together some of the Garden’s main plant collections.