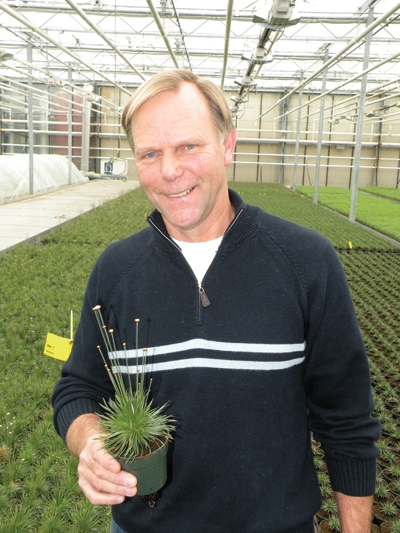 Bierhuizen with a ‘Mikado,’ a strong seller the past few years.

Energy remains a hot topic in the industry. Ontario greenhouse growers have increasingly been working co-operatively over the past 23 years to rein in energy costs by negotiating more favourable rates and researching conservation technologies.

Robert Bierhuizen, president of Sunrise Greenhouses of Vineland Station, has been involved in these efforts since Day 1, often in a leadership role. He’s one of Ontario’s foremost experts in the field, both on the administrative side of energy management programs and services, and on the practical side, with the many upgrades implemented at Sunrise.

In 1986, he formed Energrow Services, a company set up to buy natural gas directly from Alberta producers. Several growers signed on, allowing for volume price discounting and significant savings.

Ontario growers were soon considering the merits of establishing a natural gas co-operative. The result was F&V Energby Co-operative, a company established in 1988 by Flowers Canada (Ontario) to purchase natural gas for greenhouse flower and vegetable producers. Because of his success with Energrow, Bierhuizen was asked by Barney Wilson – then the executive-director of FCO – to help out. Energrow was rolled over into the new venture.

In 2003, Energby was spun off from FCO to be a stand-alone organization -– AgEnergy Co-operative. Membership eligibility was extended to all agriproducers in Ontario, not just those in the greenhouse sector. It now represents half of the natural gas and one-third of the electricity consumed by Ontario agriculture.

FOCUS OF CO-OPERATIVE IS STILL EVOLVING
■ The Co-op has expanded its mandate to also offer electricity programs (2003), and actively researches alternative forms of energy, including bunker oil, biomass, trigeneration and cogeneration systems, and wind turbine applications, among others.

Firefly Energy, designed for retail service, was launched by Ag Energy in Ontario in 2005, and was expanded to British Columbia in 2007.

Energy Productivity is a new conservation and efficiency program available through Ag Energy Services, a division of Ag Energy Co-operative. It was prompted by a series of energy audits that concluded the Ontario agricultural community could achieve combined annual savings of $80 million – including $50 million in the greenhouse sector alone – through conservation and efficiency measures.

The ag energy issue is continuing to evolve. Trigeneration and cogeneration projects, said Bierhuizen, should be getting more attention in North America. In the Netherlands, for example, such systems are quite common and provide considerable power to the grid. “It is widely accepted at the political level in Holland,” said Bierhuizen, who hopes Canadian politicians can be similarly convinced. “Greenhouses and cogeneration are a perfect fit. People in our industry know that. We just have to convince the politicians. I think we are making inroads in Ottawa and Queen’s Park.”

Greenhouses in the Netherlands currently have some 4,000 megawatts of cogeneration power installed. This has helped keep many growers in business during tough economic times. “Growers can use the heat (and the CO2), and it’s a great revenue source.”

GEOTHERMAL HEATING WILL BE EXPENSIVE
■ Geothermal energy may be an option in some regions of Canada. “It doesn’t leave an environmental footprint, and it’s completely clean.” In Europe, some projects are obtaining water of between 80ºC and 100ºC, though at considerable depths and expenditure. “You can imagine the level of investment that requires.” Governments would have to be involved, both to support the projects and to regulate the use of this hot water resource.

Biomass will also be a major energy issue for agriculture, especially given newly elected U.S. President Barack Obama’s commitment to sustainability initiatives. “We will see more promotion of renewable energy, and this will lead to many more technologies brought off the shelf much faster than they have previously.”

But growers don’t immediately have to think about totally new heating systems for dealing with heating headaches. Existing natural gas boilers can be fine-tuned, and conservation technologies – especially energy curtains – can be installed. Savings can be substantial, and with relatively short payback periods. There is no single solution to the energy challenge.

Groups such as Ag Energy will play a major role in helping growers access leading edge technologies. More importantly, it will provide the research to ensure growers are comparing “apples to apples” when considering what energy investments make the most sense. “The technologies are changing so fast, it’s almost impossible for growers to keep up with them.”

AFTER TWO DECADES, IT’S TIME TO STEP DOWN
■ After having served on various grower energy boards since 1986, Bierhuizen has decided to step down. He’s going to take a breather and spend more time with other boards on which he serves, including The Ontario Greenhouse Alliance (TOGA) and the Vineland Research and Innovation Centre.

He was also recently appointed as one of 22 producer representatives from across Canada to serve on NPAC, the National Program Advisory Committee providing feedback on government programs to federal agriculture minister Gerry Ritz.

And while governments shouldn’t need much convincing of the economic impact of the greenhouse sector – it’s not only a significant exporter and creator of jobs, its ornamental plant sales are subject to GST, and that means considerable revenues for Ottawa – Bierhuizen has accepted the new challenge of representing the industry in liaising with levels of government. He will remind officials of the impact of the greenhouse industry, and especially the work of Ag Energy in handling energy issues. For starters, both the Ontario Ministry of Agriculture, Food and Rural Affairs and AAFC recognized energy as a separate component in the Growing Forward multilateral framework, which will include $1.3 billion in overall funding over five years for non-business risk management, cost-shared programs. “Energy is recognized as being an important issue in agriculture.”

He’s the last of the original founders to “retire” from the energy co-operative, (though he’s not closing the door to a possible return in a few years). “I’ve enjoyed working with the board, but after more than 20 years, it’s time for a break.” ■

‘Consumers want a quality plant at a reasonable price’
Sunrise Greenhouses was founded by Robert and Francis Bierhuizen in 1982. They had immigrated from the Netherlands five years earlier.

First operating in St. Catharines, Sunrise was relocated to Vineland Station in 1989 to allow for future expansion. It has grown from 30,000 to 200,000 square feet and some rented space since then, along with four to five acres of field production. Potted plants have always been the main focus.

It’s a family business. Robert is president, Francis handles the accounting and administration responsibilities, and son Rodney is general manager.

Successful companies are market driven, and Sunrise is no exception. It is widely known for its work with specialty products. “We’re always on the lookout for new crops to introduce to North America.”

Robert used to be the one chasing down new introductions, but now it’s Rod’s responsibility. “He’s even keener than I was in finding new crops,” quips Robert, noting his son had just returned from a trip to Israel. “He travels the world looking for new things, and he’s been quite successful in finding great plants.”

Sunrise tries to have at least one or two new additions each year. As well, they’ve also enjoyed success re-introducing plants that were popular many years ago. (There’s a reason they were popular back then, as today’s consumers are confirming.)

Sunrise has about 20 different crops, and each has different pot sizes. That’s quite a product range.

“You can’t afford to become stale. You have to be receptive to market demands. Consumers want a good quality plant at a reasonable price. And they want to see something new.”
• www.sunrisegreenhouses.ca