News
An early ski season in the west: Accuweather

Aug. 26, 2013, State College, Pa. — AccuWeather.com reports unseasonably
warm and drier weather will dominate across northeastern Canada,
including much of Atlantic Canada, this coming fall, as a persistent
area of high pressure prevails across the region.

Aug. 26, 2013, State College, Pa. — AccuWeather.com reports unseasonably warm and drier weather will dominate across northeastern Canada, including much of Atlantic Canada, this coming fall, as a persistent area of high pressure prevails across the region.

St. John’s, Newfoundland, can expect to see a continuation of the unseasonably warm conditions into the fall as sea surface temperatures of the northwest Atlantic remain well above normal. 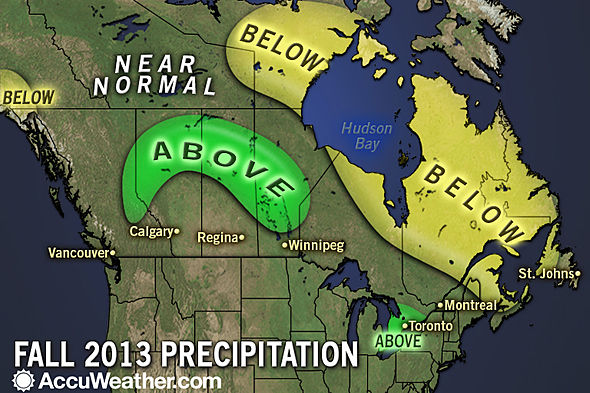 However, at least one tropical cyclone could still directly impact Nova Scotia or Newfoundland from September into early October as the hurricane season in the Atlantic becomes more active.

The fall, as a whole, will be mild along the St. Lawrence Valley as the region remains under the influence of the high pressure ridge to the northeast.

ON THE DRY SIDE IN QUEBEC

Montreal and Quebec City can expect plenty of warm days for the month of September, while October will bring drier weather with chilly nights.

Southern Ontario should expect more rain than usual for September and October, as moist air is funnelled northward from the Gulf of Mexico from time to time.

After a wet summer, the Greater Toronto area should continue to receive more rain than usual, especially from late September into October followed by a colder, drier pattern for November.

Autumn could start early across the southern Prairies with an earlier-than-normal freeze from Alberta to Manitoba. 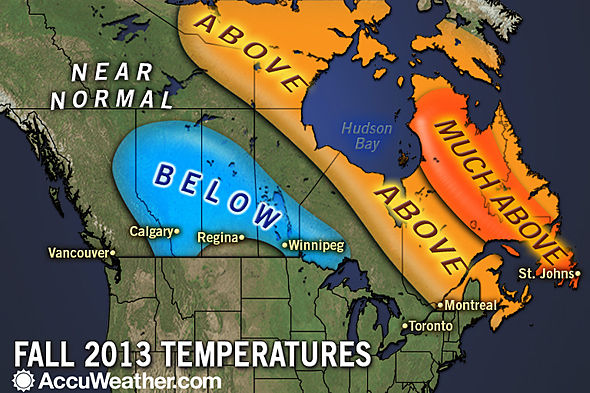 However, folks from Regina, Saskatchewan, to Winnipeg, Manitoba, should still get their fair share of warm afternoons for the month of September as invasions of chilly air get replaced by brief, but significant warmups.

AN EARLY SKI SEASON IN THE WEST

The ski and snowboard season across the Canadian Rockies should start on or ahead of schedule as colder, snowy weather gets established from October through November.

After an unusually hot and dry summer, much of British Columbia can expect more seasonable conditions this fall as the rainy season returns on schedule.

The period from late September through October actually could end up slightly wetter than normal in the Vancouver area as the Pacific storm track gets directed toward southern British Columbia.