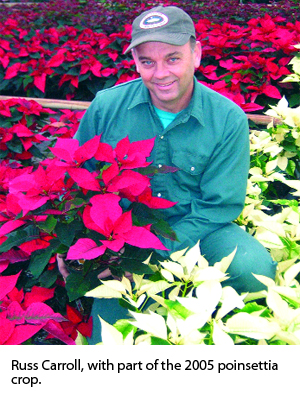 The industry’s love affair with natural gas is not quite as passionate as it used to be. It still burns brightly for most growers, because of its cleanliness and convenience. But rising prices are prompting growers to look to alternatives, and multi-fuel systems are increasingly attractive suitors.

The main attraction of multi-fuel boiler systems, according to one grower in southwestern Ontario, is flexibility. These systems “will burn just about anything” that can be augered in, notes Russ Carroll of Carroll Farms Ltd. in Norwich, a rural community just south of Hwy. 401, and about halfway between Windsor and Toronto.

Carroll Farms is a family-owned, 120,000-square-foot, potted plant operation. Their search for an alternative fuel system began about three years ago. “We were on natural gas for many years, but the prices have been creeping up,” said Carroll. “They’re choking the industry.”

Their future, the family concluded, would not be with natural gas. So they did their homework and went shopping for a multi-fuel system.

The first boiler was installed last summer. A second unit was added in late December. The two boilers will be more than enough to meet the farm’s heating needs, though the old natural gas boilers remain on standby.

(Their natural gas bill one month last fall was for $17 of fuel to heat a hot water tank.)

Maintenance amounts to about five minutes each day, ash is removed about every four to five days, “and that’s about it.”

The investment payback is expected to be only nine months.

They originally considered burning waste wood because “it was almost free” back then, recalls Carroll, though prices have since risen.

Next up for consideration was coal. Two trips were made to suppliers in Pennsylvania. Anthracite coal was found to work best.

They then burned “distressed corn,” a product that can’t be used for animal feed because it’s mouldy or otherwise unsuitable. “We burned a few hundred tons of corn, and it burns great,” said Carroll. “You can really get the heat out of it.”

While it produces about the same amount of ash as coal, corn ash is just about pure carbon and can be easily spread as a soil amendment.

Distressed corn prices have been low, ranging from between $2 and $2.60 a bushel in this part of the province. About 2.5 bushels will produce a gigajoule of heat, “so the cost is about $5 per gigajoule.”

Coal is about $7.50 to $8 per gigajoule, still a bargain compared to natural gas, and there are no problems getting it across the border.

But while all those work well, Carroll has found something better. It’s cheap in price, clean to burn, and extremely low-ash in nature. Oat hulls, a byproduct of food processing mills, are usually bagged for horse feed. However, the oat-milling company likes the idea of tapping the greenhouse market for which it need only fill trailers for bulk deliveries.

“It’s almost a complete burn,” said Carroll, “and the price is right.” Ash removal is twice a day for corn, but only once every four to five days for oat hulls.

Multi-fuel systems provide growers with options. “If the price of corn went up, we could switch to oak hulls, and if they went up, we could burn coal. You can always burn something else and use the lowest price fuel.” It doesn’t take much to switch from fuel to fuel.

The Carrolls hosted an open house last fall for growers. “People were impressed with how simple the system is, how clean it is, and the fact that it’s almost maintenance-free.”

It’s also quiet. You can carry out a normal conversation only a few metres from the boiler.

Carroll would like to one day add a hot water storage tank to further boost the efficiency of the units. During certain times of the year, he might only have to run one boiler to store hot water for nighttime heating.

“We have been able to source material for about $5 per gigajoule, including renewable products from the food industry. By being able to burn various products, you are not held hostage by the fuel companies.”

Carroll is not only sold on multi-fuel boilers, he is also now selling them through his Innovation Combustion Limited company, which is also operated from the farm.