April 7, 2010, Cornwall, England –
The first prototype of the new AlphaCrop™ vertical growing system from
Valcent
Products has been delivered and is operational at the company’s
facilities. 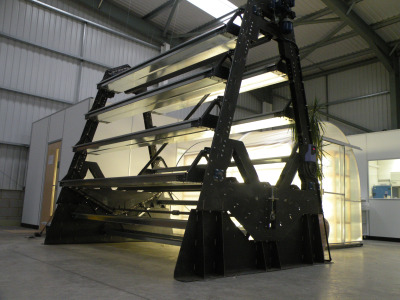 April 7, 2010, Cornwall, England –
The first prototype of the new AlphaCrop™ vertical growing system from Valcent
Products has been delivered and is operational at the company’s facilities.

“This premier unit has been designed to enable root crops
such as baby carrots and salad potatoes to be grown, as well as fruit crops
including strawberries,” says Chris Bradford, president and CEO of Valcent
Products. The company has offices in Vancouver, El Paso,
Texas and in Cornwall, U.K.

Plant trials with a variety of crops
will commence shortly, and it is expected that AlphaCrop units will complement
the production of leaf crops from the company’s larger VertiCrop system.
AlphaCrop will eventually be manufactured in three different sizes to suit a
wide range of grower requirements.

“So far the performance of the
prototype has met all our requirements,” says Bradford, “and within a few days
the second prototype will be delivered which has been designed specifically for
the keen amateur gardener and hobby grower.” 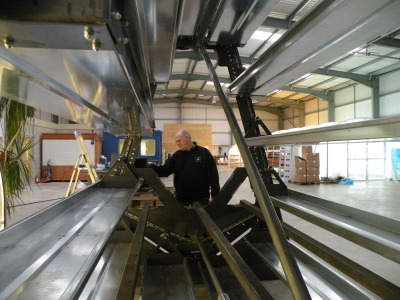 AlphaCrop can be adapted to a
variety of growing methods, employing a hydroponics system or using
conventional growing media such as compost, to meet organic standards if
required.

Together with the company’s early
success with the prototype comes the news that Launceston College will become
the first academic institute in the world to use a vertical growing system both
as an educational facility and also to provide fresh produce for their
students.  Launceston College has
recently been re-designated as a specialist technology centre preparing
students for science courses at the university level.

The college will take delivery of
the first commercial AlphaCrop unit off the production line which will be used
by the Applied Sciences department to introduce students to the concept of
vertical farming, and by students in the Hospitality diploma course supplying
fresh vegetables for their catering unit.

“We are really excited about the
prospect of working with this ground breaking technology,” said deputy principal
Claire Penfold. “We already have a close working relationship with Valcent
Products who are our neighbours in Launceston, and our students visit their
research facilities on a regular basis. When we heard about the AlphaCrop
development, we recognized immediately that it could play a key role in
providing a practical demonstration of this new technology in a learning
environment, and we will be working closely with the Valcent team to explore
its full potential.”

AlphaCrop will be distributed
throughout the United Kingdom and Ireland by Ikon International.

AlphaCrop will also be distributed
through Em-Link LLC, the Boston-based master distributor for Valcent products
in the U.S., who have already secured significant interest for the company’s VertiCrop
system in a number of major U.S. cities.