How application methods could affect viability and coverage. 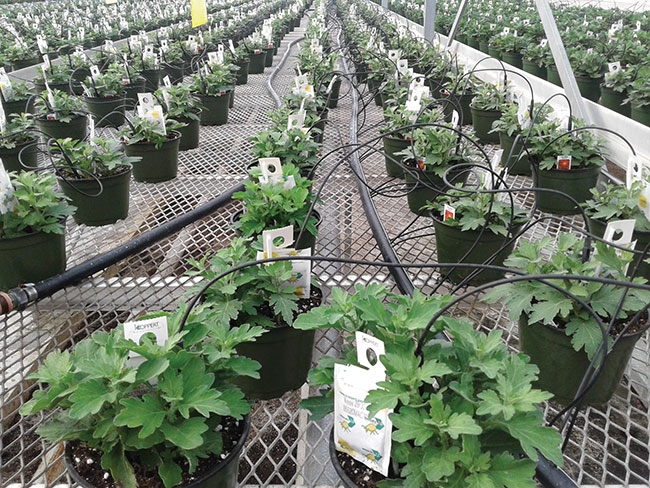 Biopesticides are compatible with most biocontrol agents, such as predatory mites, which are widely used in greenhouse ornamentals. Photo credit: Vineland Research and Innovation Centre

Let’s face it, chemicals have been around for some time now, and have allowed us to successfully manage pests through each growing season. But it’s telling, that we still have to battle the same suite of pests and diseases in greenhouse crops, only now these are resistant to many of the chemicals that have been used against them.

While pesticides undeniably have a place in greenhouse production systems, our access to effective materials continues to decline. Many older products have been withdrawn owing to the environmental and health risks they pose and few new products are registered. Moreover, societal pressures are adding constraints as never before, with consumers pushing for sustainably-grown and pesticide-free produce and flowers.

We have witnessed a major transition away from conventional chemistry in the Canadian greenhouse industry over the past 10 to 15 years. Biological control is now successfully implemented in a diverse variety of ornamental and vegetable crops. Microbial pesticides make up part of the biological mix and are ideal companion products in integrated pest management (IPM) where their unique mode of action brings value in resistance management. They contribute to the control of several challenging pests while being compatible with natural enemies.

Available commercial products are predominantly based on bacteria or fungi. Containing living microorganisms, they must be stored and applied in ways that preserve their viability. Dead organisms simply do not work! Several products contain microbes with the same or similar names, but that does not mean they all have the same spectrum or level of activity. It is important to select the right tool for the job, and apply it in the right place, at the right time, using the right method. Like other biocontrol agents, they are only part of the solution. They are best used preventatively within an integrated strategy and in a crop system that supports their success. Most are applied by spraying or drenching, depending on the disease or pest being targeted.

Application methods
Nematodes – Even though they are not microbes, nematodes share many of the same characteristics. They need to be applied to the growing medium to manage the soil-dwelling stages of thrips and fungus gnats. Heavy sprays or drenches can be made using hydraulic spray equipment, or a Dosatron; some growers even apply nematodes through overhead irrigation systems and drip lines. Whichever method is used, it is important to remove all filters, use a large spray nozzle, and low spray pressure to ensure nematodes are viable when they reach the soil. Soil should be moist at application to allow nematodes to actively search for and parasitize host larvae.

Should nematodes be applied through the entire crop cycle? Application equipment and application strategy must go hand-in-hand. As the plant canopy grows, it acts as an umbrella, so over time fewer nematodes reach the soil with decreasing benefits from each application (Fig. 1). In a crop like chrysanthemum, many growers stop applying nematodes after four to six weeks.

Biofungicides for root diseases – Routinely used in plant propagation at the seedling/transplant stage, biofungicides like Rootshield, Cease, Rhapsody and Serenade can be applied as a drench. The substrate can be treated via low-pressure watering nozzles or an irrigation system. Early application allows organisms to establish on roots, protecting against diseases and aiding root development.

Foliar sprays – Generally, microbial pesticides (fungi and bacteria) are sprayed onto plants to control foliar diseases, insect and mites. Hydraulic sprayers have historically been the workhorse of the industry. They are relatively inexpensive, adaptable and time efficient when small areas have to be treated, and ideal for making spot treatments. All operate on much of the same principles, and require an applicator to direct the spray onto the plants. There is an art to using these sprayers properly as they typically produce large spray droplets and deliver high volumes of liquid; it is easy to over-apply to runoff, which wastes product and can negatively affect efficacy. As a result, many growers now use low-flow nozzles with their hydraulic systems to produce finer spray droplets and to obtain better leaf coverage.

Low volume mist (LVM) sprayers essentially fall into two categories: cold foggers and thermal foggers. An applicator does not directly target plants with a spray stream. Rather, crop coverage is achieved through movement of the ‘mist’ through the greenhouse and the plant canopy, a process that is assisted by horizontal air flow fans helping to circulate the minute spray droplets throughout the greenhouse.

Biopesticides are compatible with most biocontrol agents, such as predatory mites, which are widely used in greenhouse ornamentals.

Hydraulic sprayer – The viability of Beauveria bassiana (BotaniGard 22WP) was unaffected when applied through three different types of hydraulic sprayers. In a commercial greenhouse trial, BotaniGard was applied to chrysanthemums using a Rittenhouse 200L sprayer equipped with a twin head at the end of the spray wand, a four-hole (#45) swirl plate and a D4 disk on each head. On average, about four times the number of spores were deposited on the topside of leaves than the underside (430/mm2 vs. 90/mm2, respectively, see Fig. 2), high enough to infect and kill (in this case) thrips. The fine spray mist coated the leaves, avoiding runoff. The two other hydraulic sprayers tested were the Rittenhouse paired with a vertical spray boom and a Dramm BP-4 Battery Operated Backpack Sprayer.

LVM sprayers – LVM sprayers offer several advantages over manually operated systems. However, the mechanisms used to create the spray droplets involve high pressure (cold fogger), or heat and kinetic energy (thermal fogger), which may damage or kill bacteria or fungi applied through them.

Using an Autofog (cold fogger) to apply BotaniGard 22WP in chrysanthemum, the topside of the leaves received about four times more spores than the underside, and spore viability was unaffected. Coverage was comparable to that obtained using the hydraulic sprayer. When tested on mini-roses, the Autofog again provided similar levels of leaf coverage on top and bottom surfaces. To determine whether this was sufficient to infect and kill thrips, foliage samples were collected from mini-roses in both the sprayed area and in an adjacent unsprayed crop. Thrips larvae were released onto them in a contained assay system. After 10 days, thrips infection levels ranged from 30 to 95 per cent across the BotaniGard-sprayed samples. While some thrips died (less than five per cent) on the untreated leaves, none showed symptoms of infection.

As the side-by-side trials in chrysanthemum demonstrated, comparable leaf coverage was obtained using the Autofog or Rittenhouse hydraulic sprayer (equipped as described before). Both methods are efficient (and there are pros and cons to each), delivering enough spores on upper and lower leaf surfaces to infect and kill thrips.

When applied through a K-22 BIO PulsFOG (thermal fogger) though, only about 10 per cent of the Beauveria spores survived; in contrast, Bacillus subtilis (Cease) spores were unaffected. While BIO PulsFOG sprayers are designed to apply heat-sensitive materials, spores are still briefly exposed to relatively high temperatures. Bacterial (Bacillus) spores are heat-tolerant whereas fungal Beauveria spores are not, which may explain the observed differences in survival.

Although many fungal spores were killed through the PulsFOG, given the high concentration in the spray tank, there are still probably sufficient living spores in the spray fog to infect pests. However, given the alternatives, the PulsFOG may not be the most suitable choice of equipment for the application of fungal insecticides.

To compare biofungicide coverage from different sprayers, Cease (B. subtilis) was applied in tomatoes using either a K22 BIO PulsFOG or a multi-nozzle vertical boom sprayer. The PulsFOG provided more consistent and better coverage of the topside of leaves, whereas underleaf coverage was better from the boom sprayer. However, owing to the density of the crop canopy and the absence of HAF fans in the greenhouse, PulsFOG coverage was probably compromised. With fan-assisted air movement in the crop, deposition on the underside could be improved.

This work led us to the following conclusions (Table 1):

The value proposition presented by microbial biopesticides in greenhouse production lies in their efficacy and compatibility with other natural enemies, allowing crops to be managed biologically through the production cycle. Bottom line, you have to use them and apply them correctly to achieve success, and the right choice of equipment is critical to that success.

Acknowledgements: This research was supported in part by Growing Forward 2, and through Agriculture and Agri-Food Canada’s AgriInnovation Program: Industry-led Research and Development Stream for Project AIP-P216 ‘Improved Biocontrol Strategies for Canadian Greenhouse Horticulture’. Support and contributions from BioWorks Inc. and Dramm Corporation are also gratefully acknowledged. Special thanks to Taro Saito and Bernhardt Steinwender (Vineland), Westbrook Greenhouses, and to Dave Mambella, Ronald Audain and Lou Schenck of Schenck Farms and Greenhouses.


Related
How to Use Non-Crop Plants in Your Thrips IPM Programs
Friendly but deadly: Getting to know your mycoinsecticides
Biocontrol thriving in Canadian floriculture greenhouses
Tips on cutting dips