During its awards banquet held during last fall’s Green Industry Show, the AGGA recognized four members for their business success, their willingness to share information, and for their innovations. 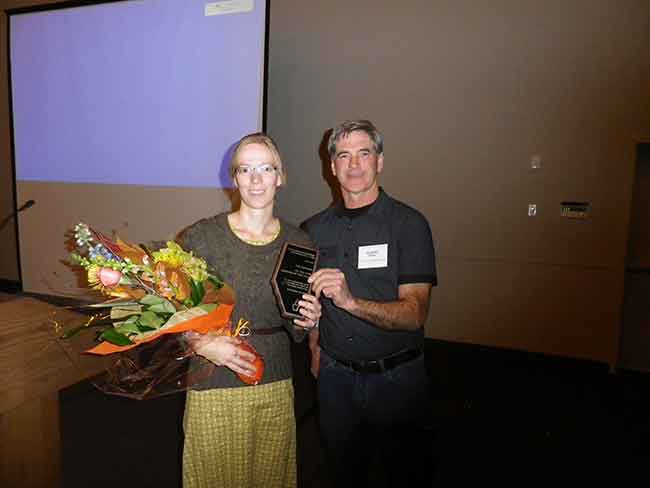 The award recognizes years of outstanding service to the Alberta greenhouse industry.

It was one of four awards presented at the AGGA’s annual general meeting held in Edmonton.

The roots of Doef’s Greenhouses (Lacombe) were set in 1969 when Joe Doef immigrated from the Netherlands from cauliflower and flower bulb country (North Holland) with the dream of starting his own greenhouse.

He grew his first crop – tomatoes – on a borrowed piece of land and in a small greenhouse. The farm seemed to be off to a good start. However, that initial structure was destroyed during a hailstorm the following year.

Not long after, Joe met Helen, and the two were soon married. Working together, they were able to build a larger greenhouse and grew what is believed to be one of the first long English cucumber greenhouse crops cultivated in Alberta.

“I am not surprised,” said award presenter Michiel Verheul (High Q Greenhouses). “They have always been visionaries, so it makes sense. Ever since those early beginnings, the Doefs have been helping pave the way for a lot more of us.”

It was not until 1976 that they began their greenhouse career on a full-time basis. In 1981, the structures were updated from wood to steel. Cucumbers and tomatoes were sold to local stores and farmers markets.

Those may have been the primary crops, but not the only ones. They trialled a number of crops, including strawberries, cauliflower, beansprouts and lettuce, “everything from soup to nuts,” Verheul quipped.

Doef’s Greenhouses has grown to 11 acres, employing almost 50 people. Joe and Helen are still very active in the business along with their children. “Joe and Helen are always willing to open their hearts and to share their knowledge and tell you what they think of your idea.”

The Doefs joined with a number of other local growers in 1987 to establish Pik N Pak Produce, a greenhouse vegetable packing facility, to help them better market their vegetables.

The Doefs also are partners in Sunfresh Farms, “another example of how much you can get done if you bundle forces,” Verheul says.

Joe and Helen have worked tirelessly for the industry, including serving on the AGGA board on several occasions. Both Helen and Joe have served terms as president.

“Today we are honoured to have [son] Paul Doef on the board as our treasurer and what a great bean counter he is,” Verheul said. “His brother Eric plays a role in the background, but you can always count on any of the family members to contribute.”

GROWERS OF THE YEAR
There were two Grower Of The Year awards presented. Lia Schipper (Schipper Farms), and Nadine and Bob Stielow (Thiels Greenhouses), received the awards.

Lia Schipper: Schipper was born in the Netherlands and grew up in a greenhouse family.

From a young age she helped her parents, Harm and Dee, with the family business, Schipper Farms, in Bow Island (west of Medicine Hat).

As a teenager, she and her older sister started their own bedding plant business. Now 10 years later, she and younger sister Colleen still run Flip Flop Flowers on their own, said award presenter Albert Cramer of County Fresh Farms.

Always eager to learn, she toured greenhouses out of the area to learn about new possibilities and growing practices. She is planning to take management courses from SAIT College.

Only 23, she has been instrumental in building the home business by managing booths at farmers’ markets to expand the distribution of the farm’s products and get feedback for new items.

“She has been the key driver in switching the business focus from peppers towards strawberries and jams, lettuce, microgreens and herbs,” Cramer noted.

With growing experience and knowledge, she is not afraid to try new ways to grow, package and distribute products.

Founded by the Thiel family in 1958, it is a seasonal one-acre facility that produces annuals, perennials and bedding plants for the retail and wholesale markets. With no formal training in horticulture and no previous experience in running a greenhouse, the Stielows purchased the operation in March of 2010.

Nadine’s formal education was in the medical field as a respiratory therapist, but her true love has always been working with plants, said award presenter Dietrich Kuhlmann of Kuhlmann’s Market Garden.

In her first year of growing and with just under 45,000 square feet of space to fill, she set out to work on producing a crop that would closely resemble the quality product the customers had come to know.

“Armed with a ton of questions, no pre-conceived knowledge or notions, an industry contact list, a big mortgage and just enough confidence to pick up the phone and introduce herself, she started learning,” Kuhlmann said.

They ended the season with most products sold and all bills paid.

Now going into her fifth year of growing and managing, Nadine has implemented many new business improvement strategies. Some of these include:

Nadine works fulltime at the greenhouse in charge of production, operations, HR, sales and marketing. Bob works offsite at his power equipment business and on weekends, evenings and during “time off” he’s in charge of infrastructure, maintenance “and most importantly, is Nadine’s business manager, sounding board and worry diffuser.”

Spencer has worked on a number of greenhouse-related projects over the years, including serving as the Greenhouse Chapter Chair on the Western Committee on Plant Diseases for 10 years and working to support various department research projects, usually in the role of tech transfer support.

He has also worked on a number of print publications for the department and is the author and editor of the monthly Hort Snacks e-newsletter, which has been running for almost six years. Recently, the content and scope was expanded to include more industries, including the greenhouse sector.

In recent years, Spencer has been working to expand the reach of the department in the areas of greenhouse production and has been able to access funding for staff resources and extension activities in greenhouses.

This year’s Green Industry Show will be held in Calgary from Nov. 19-20. For further information, visit greenindustryshow.com.