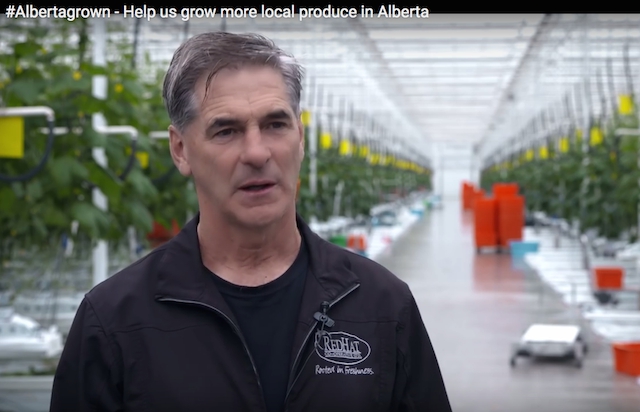 Albert Cramer, vice-chair of the AGGA and chair of Red Hat Co-operative.

Revenue from the levy will be reinvested back into Alberta to reduce emissions and support economic diversification. These dollars will also fund investment in green infrastructure, energy efficiency, renewable energy, bioenergy and innovation.

A Greenhouse Growers’ Rebate will also come into effect Jan. 1 to allow greenhouse owners to recoup up to 80 per cent of the carbon levy, bringing them in line with similar programs in effect in other jurisdictions.

The rebate was achieved after an intensive lobbying effort by the Alberta Greenhouse Growers Association. Click here for one example of that campaign.

“Alberta’s Climate Leadership Plan is a made-in-Alberta strategy that means new markets for our resources, rebates for families and lower taxes for small business,” said Joe Ceci, president of Treasury Board and minister of finance.

“And it’s working. The approval of the Trans Mountain and Line 3 pipelines will encourage investment in our energy industry and generate thousands of new jobs.”

The levy will be charged on all fuels that emit greenhouse gases when combusted at a rate of $20 per tonne in 2017 and $30 per tonne in 2018. These include transportation and heating fuels such as diesel, gasoline, natural gas and propane. Farmers and First Nations are exempt from the levy for certain fuels and uses.

Albertans can learn more about how the Climate Leadership Plan benefits the province at climate.alberta.ca. Details on how the levy and exemptions work for businesses, farmers, First Nations and other entities are also available online.

Even with the implementation of Alberta’s carbon pricing, Alberta continues to have an overall tax advantage compared to other provinces, with no provincial sales tax, health premium or payroll tax. Albertans and Alberta businesses will still pay at least $7.5 billion less in total taxes and carbon charges than if Alberta had the same tax system and carbon pricing as other provinces.