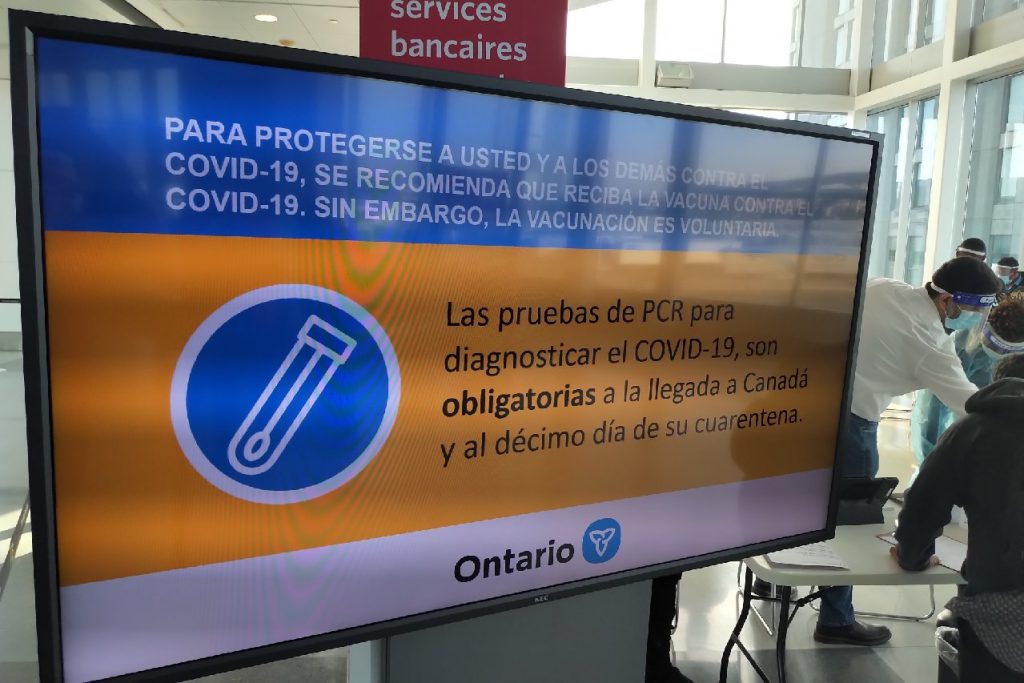 Temporary foreign workers arriving at Toronto's Pearson Airport are now greeted in their own language and provided COVID-19 vaccination resources that are culturally appropriate. Photo courtesy of OFVGA

Efforts to translate public health resources into different languages have been key to the growing success of vaccination efforts for agricultural migrant workers arriving at Toronto’s Pearson International Airport.

First launched in early April by the Ontario provincial government, the province has offered voluntary vaccinations to 4,300 incoming farm workers as of last week. Hired by Ontario farms through the Temporary Foreign Worker program, hundreds of workers have reportedly received their first shot. Exact numbers were not available from the Ontario Ministry of Health.

At first, the project didn’t seem like it would succeed.

As many of the workers originate from places like Mexico, the Caribbean, and Thailand, organizers soon realized that there may have been language or cultural barriers. Funded by the Ontario Ministry of Agriculture, Food and Rural Affairs (OMAFRA), the OFVGA collaborated with Occupational Health Clinics for Ontario Workers and hired community liaisons to translate public health resources to help workers make better informed decisions about their vaccinations.

Their efforts paid off. Stefan Larrass, policy advisor at the Ontario Fruit and Vegetable Growers Association (OFVGA) reveals that once they launched the new resources, they observed a significant uptick in acceptance rates among workers offered the vaccinations.

While the vaccination was still voluntary, collaborative efforts between the provincial bodies have resulted in substantially higher levels of vaccinations.

“From then on… the consent rate has improved, in particular among Mexican flights where they can reach up to 90 per cent,” says Larrass. But it wasn’t as simple as translating from one language to another, he adds. “The vocabulary that was chosen to express that information was designed with the help of cultural liaisons…And so they didn’t translate it through a kind of academic lens, but through their lens of understanding the community.”

The Spanish community liaison and translator, who was hired by the OFVGA with the project funds, even greeted Mexican workers in person at the airport and was available to help address their concerns.

“It’s a big decision. You come to another country, you get off the plane, you’ve already been traveling for a long time, and someone is asking you to make a medical decision,” says Larrass. Having interpreters and resources in relevant languages were key to helping the workers better understand the vaccination consent form and the process. “To me, that’s powerful.”.

At the federal level, the Canadian government has partnered with Switch Health to provide targeted support in different languages as the workers complete their mandatory Day 8 (formerly Day 10) test during their isolation period after arrival in Ontario.

Follow up doses of the vaccines will be administered through local health units near their destination farms.