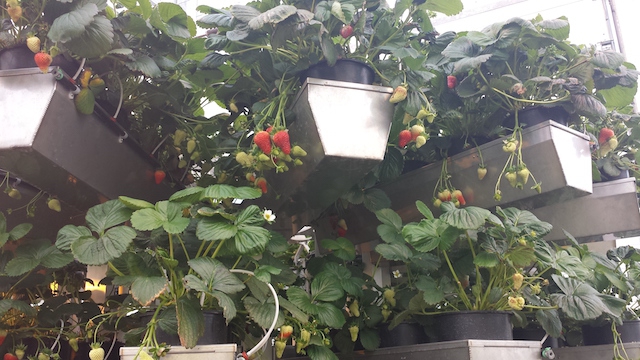 March 6, 2017, Vancouver – Affinor Growers will showcase its growing technology at the BCTECH Summit on March 14 and 15, at the Vancouver Convention Centre, and in partnership with University of Fraser Valley.

The BCTECH Summit is the largest technology conference in British Columbia showcasing the province’s technology industry. Affinor will demonstrate its proprietary growing systems within the University of Fraser Valley’s exhibit in agri-technology. The Summit brings together entrepreneurs, investors, companies and potential customers looking for fresh ideas around innovation and new opportunities.

Strawberry Testing: Affinor continues to grow and test strawberries on both towers now installed at the BioPod Agriculture Innovation Centre in Surrey B.C. The second “high density tower” is testing four different strains of strawberries and Affinor expects results from the growth trials later this spring.

Traditionally, winter strawberry production can results in low yields. Affinor’s goal is to increase production significantly year round with the correct formula of growing technology, lighting and crop models currently being developed.

Medical Cannabis Testing: Affinor has yet to ship and install a tower at the Kelowna medical cannabis company (see press release dated April 4 2016) as they complete some internal renovations and expansion projects. Affinor will continue to honour the agreement, support the company and ship the growing system when requested.

To expedite growth trials with cannabis plants, Affinor has signed an “On-Site Testing License Agreement” on February 22 2017 (See press release dated February 27 2017) to a local grower in Mission BC. The growing technology has been delivered, installed and growth trials are expected to start the week of March 13, 2017.

As cannabis becomes more established in North America, cost-effective commercial production will be needed as the market stabilizes and competitive advantage is achieved via efficiencies. Affinor sees this as an opportunity to diversity its technology into other markets with high value crops and be the first vertical system actively growing medical cannabis in Canada.

Related
Lions and tigers and bears … and Verticrop
Don’t let the snow get you down: e-GRO Alert
Automation and recycling on CGC’15 bus tour
THE TRUE NORTH Strong and Free … and Fed