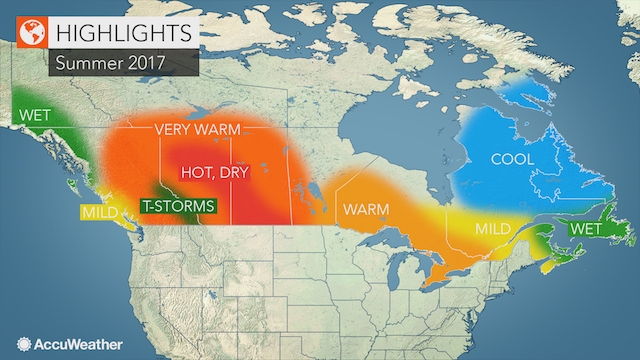 May 3, 2017 – AccuWeather reports an active wildfire season is in store for the Canadian Prairies this summer, especially northern Alberta, as hot, dry weather dominates.

Meanwhile, Ontario will face rounds of thunderstorms with the threat for severe weather increasing in July and August.

Hot, dry conditions to heighten wildfire threat in the Prairies

The hottest weather of the summer will focus on central and western Canada, leading to an increasing drought as the season progresses.

“The drought may become much more widespread across the western Prairies during the middle and end of summer,” AccuWeather Canadian weather expert Brett Anderson said.

The hot, dry weather will also contribute to a heightened risk of wildfires across the region, especially in July and August.

“If there is a region where there may be a significant increase in wildfire activity later in the summer, it would be the northern half of Alberta,” Anderson said.

While hot, dry weather will be the theme for much of central and western Canada, areas close to the Pacific coast will have temperatures that are closer to normal.

“Ocean water surface temperatures off the coast are running cooler compared to previous years, and this should keep temperatures close to normal along the coast.”

This includes Vancouver, which experienced a warmer-than-normal summer in 2016.

The Canadian Rockies will also have breaks from the heat as thunderstorms frequent the mountains.

“I think there will be more thunderstorms than usual the second half of the summer [over the Rockies],” Anderson said.

While the thunderstorms will bring rainfall and limit the heat, lightning could spark wildfires if the storms develop near unusually dry areas.

This summer is shaping up to bring typical warmth to much of Ontario and southern Quebec, while unbearable humidity remains at bay.

“The summer will be less humid than usual [in these areas],” Anderson said. This is due to cold fronts passing through the region on a regular basis, limiting the frequency that AccuWeather RealFeel® Temperatures reach dangerous levels.

The fronts will also bring many opportunities for thunderstorms, some of which may be severe.
“There is the potential for a few severe thunderstorm outbreaks in Ontario, especially from July into mid-August,” Anderson said.

This includes major cities such as Ottawa and Windsor, Ontario.

While summer heat dominates much of Canada, a much different weather pattern will set up over Atlantic Canada.

Cool and wet conditions will dominate the weather pattern for much of Nova Scotia, Prince Edward Island, Newfoundland, Labrador and northern Quebec through August.

“This summer is not expected to be unusually hot, but humidity may be higher than usual the second half of the season,” Anderson said.

The higher humidity will fuel showers and thunderstorms throughout the summer months, especially areas farther inland away from the comparatively cool waters of the Atlantic Ocean.

“Coastal areas may be especially cool due to below-normal sea-surface temperatures and a greater number of days with fog,” Anderson said.