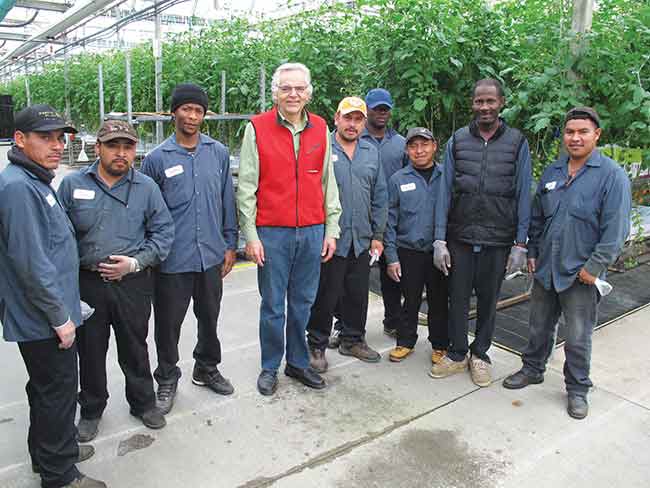 Anthony Cervini, with some of his seasonal employees.

The program is celebrating its 50th anniversary supplying Ontario farmers experiencing domestic labour shortages with seasonal workers from Mexico and the Caribbean.

Approximately 17,000 seasonal workers from Mexico, Jamaica, Barbados, Trinidad/Tobago and the Eastern Caribbean States have been placed on Ont-ario fruit and vegetable farms this growing season as a supplement to local labour through SAWP, which is administered by Foreign Agricultural Resource Management Services (FARMS). Approximately 1,450 farms will benefit from the program this year.

Anthony Cervini, representing the Ontario Greenhouse Vegetable Growers, has served on the FARMS board since 1990. He is also the president of CanAg Travel, the authorized travel agent for SAWP.

SAWP, he says, “has been the lifeblood of our industry. The greenhouse industry today across Ontario wouldn’t be where it is without the offshore program. There are not enough local workers available, especially during peak season.”

Like other greenhouse growers across the province, Apollo Farms and Lakeside Produce welcome many returning workers each year. “Growers like to get workers who have worked with them previously.”

One of Apollo’s veteran returnees, for example, has been with them for 27 years.

SAWP also works well for the offshore employees. “It provides a good income they can send back to their families,” says Cervini. “They have bought land and built homes and sent children through school with the money earned here. It’s definitely a win-win situation.”

The participating countries also benefit from the technology transfer of knowledge gained by those working in Canada. “There are many farms in the Caribbean and Mexico, but often not at the level of technology that we have here.”

SAWP got its start in 1966 when 263 seasonal workers from Jamaica were brought to Ontario to fill a shortage of available Canadian workers. Over the past 50 years the program has grown steadily and has consistently exceeded expectations, providing Ontario farmers a steady source of reliable, skilled and professional labour.

“Ontario produces some of the highest quality fruits and vegetables in the world. Without the supplemental labour they hire through SAWP, many of our growers just wouldn’t be able to stay viable,” says FARMS president Ken Forth.

At the same time, the program has given seasonal agricultural workers employment, benefits and educational opportunities not available to them at home.

“Half a century after it was created, this program continues to serve the same vital function on an even larger scale,” says Forth.

A recent report by Agri-food Economic Systems found that chronic labour shortages continue to challenge the agricultural sector due to aging demographics, competition with other sectors and fewer numbers of young people pursuing careers in farming. As a result, demand for workers under SAWP is projected to remain steady.

The report cited the program as a key reason Ontario’s horticulture industry is able to generate $5.4 billion in economic activity and approximately 34,280 jobs.

It’s estimated that two jobs for Canadians are created in the agri-food industry for every seasonal agricultural worker employed through SAWP at Ontario farms.

More information about the program can be found at www.farmsontario.ca.