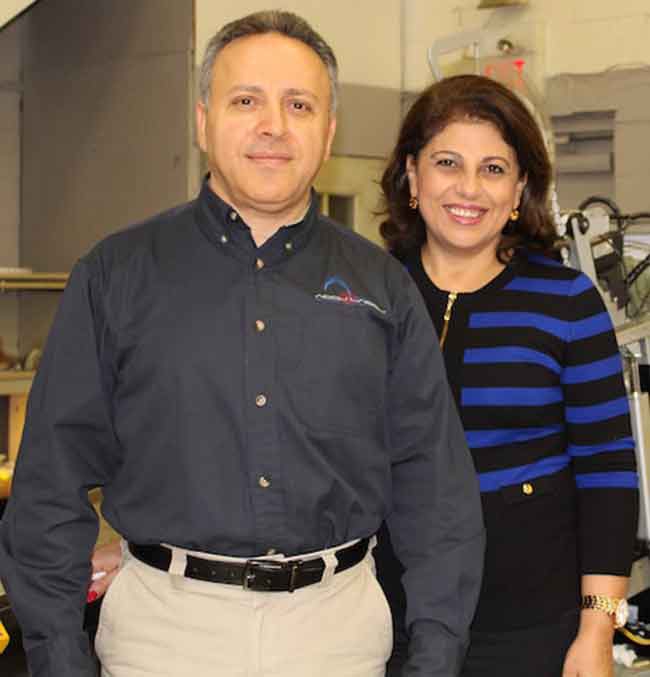 Ag-Tronic Control Systems, owned by Joe and Samia Sleiman, designs and manufactures automated packing and labelling solutions for greenhouse and outdoor fresh fruits and vegetables. It has customers throughout Canada, the U.S. and Mexico.

Last year was the silver anniversary for the company now celebrating its 26th year in business.

Ag-Tronic was started by the Sleimans in the basement of their house in Wheatley, Ontario, in January 1991. They have since been joined by their four children in the business, something the family takes great pride in.

Joe is a graduate of the electromechanical engineering technician program at St. Clair College. “My job was to take an engineer’s designs and make a working product, but I quickly realized that I preferred to be the designer.”

He had been working at a farm equipment dealership for a few years before the economy slowed and the position was cut. But what seemed like a setback was a springboard to a new phase of his career, that of entrepreneur.

TWO MAJOR INDUSTRIES IN THE REGION
In southwestern Ontario, there are two major industries – automotive and agriculture. The former was steeped with automation companies, but not so much the latter.

“I wanted to design things, something I had been doing for a while, and there was no one else doing it in our area at the time in agriculture. We knew that agriculture is a pretty stable industry. When people stop eating, let me know,” Joe quips.

And the industry needs automation because of the competition from imported fruits and vegetables that come from countries with much lower wage rates. “I knew automation would help improve the bottom line for growers here. We took a chance and obviously it paid off.”

He doesn’t see automation so much as a means of reducing overall labour requirements, but of improving product quality and worker productivity.

Ag-Tronic’s first product was a height control system for field tomato harvesters, and its success attracted a lot of attention. They then moved on to watering systems for transplanters and a tractor steering system, among others.

The greenhouse industry had taken note of their design success, and Joe was soon at work on a pair of new projects. One was to develop a system to count the number of tomatoes in a tray to interface with a labelling system. The second was to design a system to measure the length, width and curvature of greenhouse cucumbers.

The key to problem solving, he notes, is being a good listener. “You have to understand clearly what the customer wants.”

He adds that you also have to know what applicable technology is available, and that any solution has to be based on a good return on investment.

Quality allows you to set a price that ensures you remain profitable, he explains. At the end of the day, if your system is saving a customer money, they will pay for it. And, of course, they will tell their friends.

A year after designing the cucumber machine he began working on a system to automatically pack them in a box, and to do it at almost three times the speed of comparable systems from Europe. “It was a big hit.”

He then developed a labelling system for cluster tomatoes that applies a PLU sticker on each piece of fruit. “We had done market research for a couple of years and couldn’t find a comparable labelling system, so I thought, why don’t I just build one.”

He and his team didn’t waste much time. It took only four-and-a-half months from the concept stage to a prototype tray labeller that “exceeded expectations.”

ACCU-LABEL A SPINOFF COMPANY
This led to the creation of a spinoff company – Accu-Label – that Joe formed in August 2001.

The ORB-it® G-2 Print & Apply Labelling system is used with a variety of fruits and vegetables. It is versatile and means growers don’t have to carry a large inventory of labels to match up with different varieties. The labels also include traceability coding as part of food safety measures.

The move into more international markets has been prompted by the positive response received at trade shows. Interest has been shown by growers and packers in South Africa, Chile, Argentina, Italy and New Zealand, to name a few.

Getting into these markets will take a lot of time, “and we’re still trying to enjoy our grandkids,” says Joe with a chuckle.

“Getting more market share is difficult because we don’t have a large sales team yet,” says Joe. “We’re working on it.”

Growth has been a constant, and largely fuelled by word of mouth endorsements from growers. The company has moved three times over the years to larger facilities.

The company has won a pair of awards over the years. In 2000, it received the Business Excellence Award in Leamington, and last year it won an international technology award in Taiwan.

“You have to provide a very good product at a fair price that at the end of the day is helping the customer save money.”