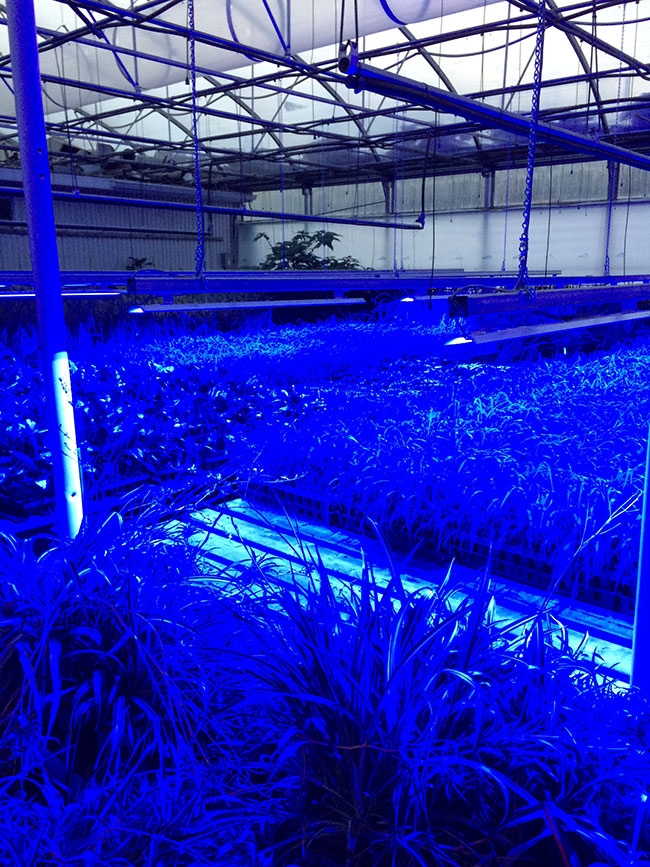 Starting a decade ago, researchers focused on the potential of LED (light-emitting diode) lighting for greenhouse horticultural crops, whether ornamental or vegetable. Usually, high pressure sodium lamps (HPS) are the most used in the greenhouse industry around the world.

Their efficiency for converting electrical energy into radiant energy (or photosynthetically active radiation, PAR (400 to 700 nm)) is between 26 to 30 per cent. Depending on the lamp model, HPS lamps have between seven and 10 per cent emission in the blue wavelengths (400 to 495 nm). The emission spectrum of an HPS lamp cannot be modified to suit the more specific needs of crop species and those of the market. Among all plant-specific wavelengths, blue wavelengths are known to favour photosynthesis and development of anthocyanins, which are responsible for the purple colouration found in plants. In contrast to HPS, LEDs allow such a customization of the spectrum, i.e. selecting only pure blue (wavelengths 450 to 495 nm). Hence, their use in greenhouses would enhance purple pigmentation of purple ornamental grass.

Les Entreprises Normand Tellier Inc. in St-Félix-de-Valois, Québec owns the DECO-Style brand which supplies to distributors (Ball Horticulture, Norseco, JVK, Frank Zyromski Greenhouses). However, during the winter production and shipping periods (January to the beginning of March), the low level of natural illumination, even with the addition of HPS lamps, does not make it possible to obtain optimal purple colouration in Pennisetum and in other species at the liner stage. Plants remain pale green to light purple. The company decided to install blue LED fixtures to get better quality plants with deeper colouration – and they got it. Here was the set-up (Fig. 1):

The result of growing under LEDs
Compared to plants with 28 days of HPS illumination, plants of the three Pennisetum cultivars lit by LED for only 14 days were bushier, more vigorous, more pigmented with red, and had leaves that were larger by two to three mm. Evaluation of the foliage by striking the leaves by hand also showed greater rigidity. In addition, since lighting with blue LEDs resulted in more vigorous plants, fewer Botrytis diseases causing tiller mortality were observed. We could conclude that as the number of LED lighting days increased, pigmentation, sturdiness and tiller number improved and less gray mould caused by Botrytis was noticed.

Pennisetum x advena ‘Fireworks’
This cultivar was the most responsive to blue LEDs. From Feb. 27 to March 13, LED lighting for 14 days promoted a more intense red colour than 28 days of HPS lighting (Feb. 13 to March 13). As shown in Fig. 2, HPS contributed little to the colouration. Tiller number increased with lighting time (14 days to 28 days), while this number remained stable under HPS lighting. On average, tillers were more vigorous, height was five cm higher and leaves were one to two mm wider than with HPS.

Pennisetum x advena ‘Rubrum’
A 14-day treatment under blue LED lighting resulted in better appearance compared to a 28-day treatment with HPS lamps. Both pigmentation and vigour were improved (Figure 3). Generally, plants had less gray mould and tiller mortality. On average, plants were six cm taller and leaves were wider by three mm.

Pennisetum purpureum ‘Prince’
Tiller number under LED lighting increased with time, while this number decreased under HPS lighting due to mortality (Figs. 4 and 5). Under LED treatment, the root system was more developed, plants were three cm taller and leaves were wider by two to three mm.

Conclusions
Data observations and analysis showed that LED lighting contributed to the improvement of liner plant quality. Blue radiation, as cited in the literature, is favourable for photosynthesis and the production of anthocyanin pigments in Pennisetum.

Tillering is an important aspect in the production of quality ornamental grasses. Under LEDs, there was a constant progression of tiller number per plant, except for P. x advena rubrum where it was less accentuated. Under HPS, this progression was slower. For ‘Prince’ and ‘Firework’, tiller mortality under HPS was observed but was significantly less under LED treatment. Mortality reflects a lack of vigour, favouring gray mould development (Botrytis spp.). Scientific literature shows that LED lighting with a single blue beam controls gray mould on lettuce and tomato. Although the test was not scientifically designed to determine the effect of blue wavelengths on Botrytis, one can assume that, in regards to the results, LED lighting could have an anti-botrytic effect. This deduction would require additional scientific experiments to establish its full scope and effects on a broader spectrum of species and cultivars.

Finally, installing LED bars for an average illumination of 100 μmol /m2/s was expensive. The cost of lighting and installation was about five to seven times more expensive than HPS. These results showed the same trend as those presented by Nelson and Bugbee (2014). Although it is possible to obtain better quality, longer lamp life and a repressive effect on Botrytis, DECO-Style will need to assess whether installing this technology on a larger surface will be worthwhile in the long run.

The authors would like to acknowledge the Québec Ministry of Agriculture and Jean-Louis Legault from Lidlum lighting for their financial and technical contributions.

Michel Senecal is a greenhouse consultant in Montréal. Lisa Tellier is head manager and director of research and development at Entreprises Normand Tellier Inc.