Two winners of the Premier’s Award for Agri-food Innovation Technology showcase their greenhouse technologies, strategies and business models – all part of their recipes for success. 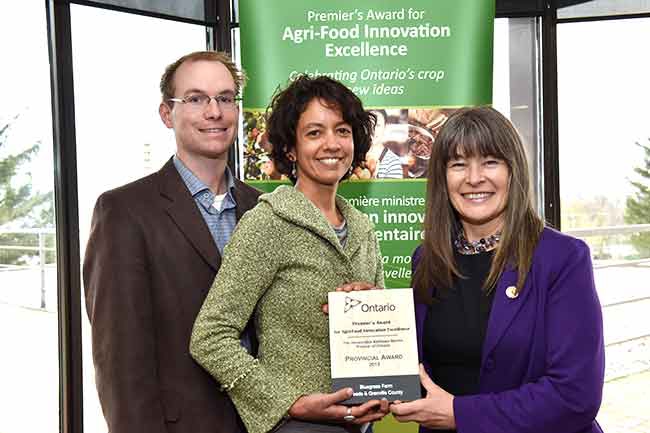 August 2016 – You were first introduced to two Premier’s Award winners in our February issue in the cover story on urban agriculture.

BLUEGRASS FARM: ECONOMICAL HEATING FOR YEAR-ROUND PRODUCTION
In Jasper, near Ottawa, Bluegrass Farm owners Leela Ramachandran and Bradley Wright are using heat from below to keep their crops growing well through the long winter. The couple has four greenhouses (10,000 square feet in total) under production, with over 30 cold-hardy crops, including greens and herbs, radishes and spring turnips.

“We had done a couple of years of market gardening and were looking to scale up,” Ramachandran says. “We wanted to find a niche.”

In their second year, Wright approached several local chefs. “I would have green zebra tomatoes for sale, and the chef would say I was the sixth person that week offering that product. We had to do something unique.”

Wright did a lot of research into winter production methods, starting with Eliot Coleman’s authoritative descriptions in The Winter Harvest Handbook, and discovered small farms in Vermont and New York that were using radiant floor heating to grow cold-hardy crops year-round.

The couple notes that heating the soil is 50 per cent more efficient than heating the air, since the soil holds heat better and root temperature is more critical for plant growth than is leaf temperature.

Wright visited a couple of farms in New York state and Vermont over the winter of 2014. Although Ramachandran remained skeptical, Wright was convinced it would work.

He points out that with the elevation in the Appalachian Mountains, the other farms were actually one plant hardiness zone colder than Ontario.

“Still,” she says, “our system had to be adapted to our site, soil and climate. Since our soil is quite shallow, often only two feet above bedrock, we had to excavate the soil, drill holes in the bedrock and cement the greenhouse ground posts into the ground. This was a huge undertaking.”

The couple used four-inch thick extruded polystyrene insulation (roofing insulation) for the floor and a shallow perimeter wall. Over the insulation, they placed a thin layer of soil and then laid the plastic tubing system.

“The tubes are filled with water, with a small amount of glycol added as antifreeze,” Ramachandran explains. “The tubes are a closed-loop system so the water never comes into contact with the soil or crops. An outdoor wood boiler heats the water.”

On top of the tubes is 18 inches of soil. The couple uses two layers of floating row cover to insulate the crops at night and on cloudy days when the air temperature goes below zero.

“We’ve found that the insulation is highly effective at retaining heat,” Ramachandran says. “Our main challenge in cold weather is ventilation. The moisture buildup inside the greenhouses leads to condensation and even ice on the plastic, reducing sunlight penetration.”

Bluegrass is one of only a few farms in the region that offers “community supported agriculture” baskets through the winter. Each CSA basket contains fresh greenhouse greens as well as root crops harvested from area farms in the fall. Bluegrass also sells salad greens to restaurants, stores and wholesalers in Ottawa and nearby communities.

While they did their homework, Ramachandran admits there have been times they’ve been overwhelmed, when they had questions but no one locally to turn to for answers.

“Winning the Premier’s Award is a recognition of the extra risk and challenges that we have taken on in order to develop an innovative business,” she says. “It’s a reminder that we are on the right track, and that others can see the value of what we are working so hard to achieve.”

Their CSA sold out the last two years and they are expanding it this year to 150 customers from 120. They are also adding new wholesale customers all the time, and expansion of production is in the works. “We feel that it’s the right time for this business,” Ramachandran says, “now that there is such a strong demand for local food.”

BEVERLY GREENHOUSES: SUPPORTING IPM WITH BANKER PLANTS
Anyone growing cucumbers contends with insect pests, and the VanderHouts (owners of Beverly Greenhouses in Waterdown, Ontario), are no different. But co-owner Jan, his brother Dale, and other members of the family are doing more than just using traditional controls.

They are actively supporting beneficial predators by using banker plants, where the beneficials can make a home and take a break from pest control.

In collaboration with beneficial insect suppliers, the VanderHouts have experimented to find the best locations, watering regimes and pruning timelines.

“We are aiming for as natural production systems as we can,” Jan says. “We were approached by our three suppliers and have been working with them closely. It’s a complex system to enter into, because you have to go all in. You cannot use anything harsh in terms of chemical control if you’re going to use beneficials. It limits the fungicides you can choose from and there have been some hard decisions.”

He adds that at times “we must accept a certain amount of damage from a pest or disease in order to maintain the biological balance. Small amounts of pesticide residues can have a significant impact on establishing the required beneficial insect population to maintain reasonable pest control.”

In terms of the best locations for the banker plants, Jan says they tried the easy ones first, under the canopy of the main crop.

“It was too dark so we then tried above the canopy and that has worked well,” he explains.

“We are using big plants, and they create a bit of a shadow but they are mostly out of the way. Watering is by sensor, like the cucumbers, in conjunction with a timer. We did a little too much pruning at first, so now we just prune less, about every six weeks.”

The Vanderhouts have tried alyssum, which they have found is messy but a good Orius host, and some other banker plants including hot pepper.

Jan says it was exciting to have won the Premier’s Award and nice to have the recognition for their hard work.

“As a consumer, I hope this sort of work can spread and into different parts of agriculture to clean up the food supply,” he says. “We have an open door policy, and the insect companies are also spreading the knowledge, so hopefully use of beneficials will grow.”