News
A celebration of innovation at Harrow

Sept. 9, 2009, Harrow, Ont. — A special milestone will be marked Saturday, Sept. 12, as the
Greenhouse and Processing Crops Research Centre in Harrow, Ont., celebrates its
centennial.

Sept. 9, 2009, Harrow, Ont. — A special milestone will be marked Saturday, Sept. 12, as the
Greenhouse and Processing Crops Research Centre in Harrow, Ont., celebrates its
centennial. An open house will be held from 10 a.m. to 3
p.m. Featured will be tours, equipment displays and demonstrations, in addition
to a barbecue lunch prepared by local 4H members. 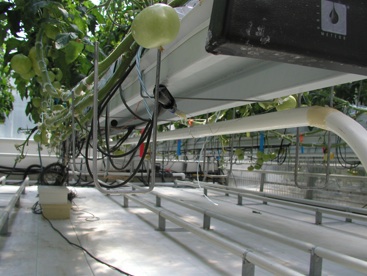 Greenhouse crops have been a focus at the Centre since the 1940s,
with the first research greenhouses constructed in 1948, according to retired
researcher Dr. Gordon Ward. He wrote the Greenhouse
Vegetables report published during the Centre’s 75th
anniversary. Prior to 1947, the Centre – then called the Dominion Experimental
Station – had several greenhouses, but they were used to grow tobacco
transplants. “The greenhouse vegetable industry has changed a lot over the past
20 years, much higher yields are realized, production is on a more scientific
basis, and many major problems have been faced and resolved,” said Dr. Ward.
“Greenhouse vegetable research at the Harrow Research Centre has played a major
role in this change.”

Several features in our August 2009 edition took a closer look at the history of research at
Harrow. It’s a fascinating recap, offering a brief sampling of some of the
work.

Mass production of Encarsia formosa was
started by Dr. Bob McClanahan at the Centre in 1970-72, with considerable
support and encouragement by local growers. “In 1974, Better Yield Insects Co. was formed in Ontario and started the
first commercial production of E. formosa and Phytoseiulus persimilis, a predatory mite for two-spotted spider mites,”
noted Dr. Les Shipp (AAFC) and Gillian
Ferguson (OMAFRA) in the August issue. “These major accomplishments were the start of
the commercial greenhouse biological control industry in Canada.”

The Centre
has had decades of experience in assisting with powdery mildew controls, most
recently focusing on new reduced-risk materials.

In 1987,
Centre researchers began studying cover materials and demonstrated that tomato
and cucumber yields are about the same under double poly as under glass, with
the added benefit of a 30 per cent energy savings with the former. As a result
of these findings, many of the greenhouses constructed in Leamington are double
poly. It’s estimated the move has meant construction savings of close to a
billion dollars and energy savings of 30 per cent, as compared to glass.

Grow-pipe
research at Harrow, among other projects, has significantly improved
microclimate management, leading to improved fruit quality and less disease.

Harrow has
long been a major contributor to the success of the Canadian greenhouse
vegetable sector. And it’s had great partners, with companies and growers
helping sponsor research and supply project ideas. Growers in every region of
Canada have benefited from work done there.

It's time to celebrate!