News
A Celebration Fit for a King and Queen!

This past summer’s Dutch trade mission to Ontario was quite successful, with a pair of major horticulture agreements finalized. 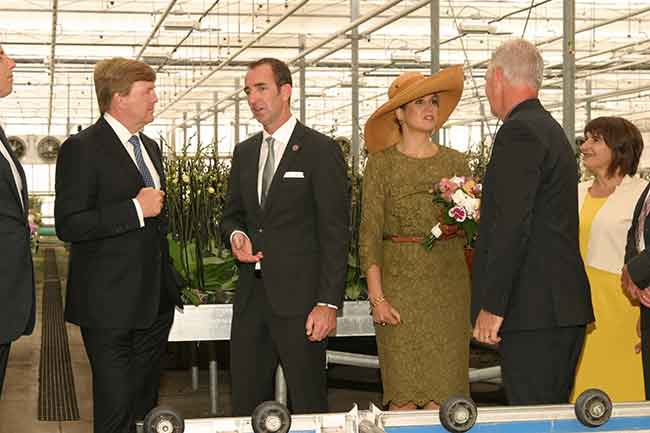 October 2015 — With a Canadian industry so heavily influenced by the Netherlands, it was quite fitting this summer’s Dutch Royal Tour of Ontario included a visit to a greenhouse.

King Willem-Alexander and Queen Màxima spent much of an afternoon at CosMic Plants, one of North America’s leading orchid growers.

This year, the Netherlands is commemorating the seventieth anniversary of its liberation and Canada’s contribution to that historic struggle has been a central theme of the state visit.

CosMic Plants is owned by Neil and Mike van Steekelenburg, a pair of brothers of Dutch descent. The two started the company in the summer of 2004.

The Royal Couple were given a tour of the 80,000-square-foot facility, and were quite interested in all facets of the operation, asking questions at each stop and closely examining the plants and equipment.

A reception followed immediately in the greenhouse – with benches full of colourful plants as the backdrop – for a number of local growers and suppliers, along with members of a Dutch trade delegation who had spent several days touring the province.

The delegation toured the Vineland Research and Innovation Centre, meeting with researchers in the Consumer Insights and Horticultural Production Systems units.

The trade mission was quite successful, with a pair of major horticulture agreements finalized. The signing ceremonies, fittingly, were held at the conclusion of the greenhouse tour with King Willem-Alexander and Queen Màxima congratulating the participants.

MONTHS OF PLANNING
Mike and Neil were first approached by the Royal Dutch Embassy in Washington in January to see if they would be interested in hosting the visit.

After some initial phone calls, embassy staff from both Washington and Ottawa visited the farm. In February, the tour stop was confirmed.

Planning for the visit required a lot of work. “It obviously took a lot of our time,” Mike explains, “but the support from both embassies was great.”

They also worked with various law enforcement departments, along with the Royal Household and the Dutch government.

The extensive planning paid off in a flawless day of celebration.

The Royal visitors were quite keen to learn about all aspects of the greenhouse. “They were interested in how we market our orchids, what the challenges are and why we chose the Niagara region to establish our business,” Mike explained.

“Their questions were very sharp in the sense you knew they were very well informed. They were so easy to talk to and it was so cool to just have a conversation with them.”

Planting and transplanting operations were continuing during the visit, much like any other day. It was business as usual in a sense, though productivity may have taken a backseat to the excitement of the tour in which staff were continually interrupted by visitors wanting a closer look.

“We were to keep it under the radar for a long time,” Mike notes, “but once we explained to our employees why we had all these visits from people in suits, they were very excited.”

The staff took great pride in preparing the greenhouses for the Royal reception, and patiently took many phone calls from people looking for more information.

“All in all,” says Mike, “it was a total team effort. Without our staff, we wouldn’t even have this business to begin with, so their role is big.”

ABOUT COSMIC PLANTS
CosMic Plants began with 60,000 square feet of greenhouses, and has since grown to 80,000 square feet. They have 15 employees, and also grow orchids off-site.

The major crops are Phalaenopsis orchids in 5” containers and 2-1/2” Minis. Total production is about 9,000 units per week.

Products are sold as far away as North Bay and Texas, and through to Edmonton and St. John’s, Newfoundland. However, the majority is sold in and around the
Toronto area, along with Montreal, Boston, New York “and everything in between.”

For complete photo coverage, visit our news archives at greenhousecanada.com and type “Royal” into the search window.