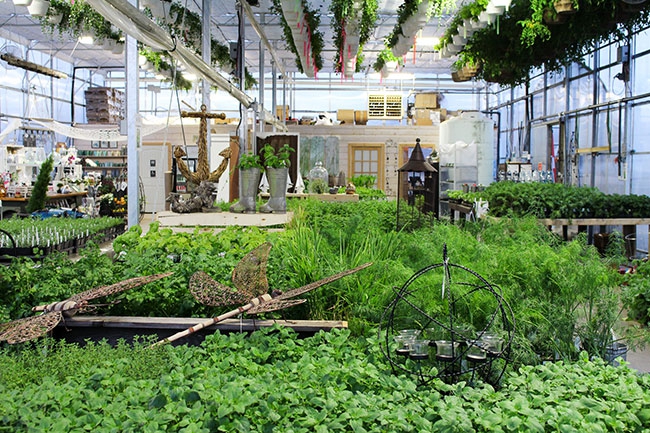 “Every year has been better and better.”

January 2017 – Building our greenhouse in 2013 was an adventure from the very start. A rainy summer pushed back our construction by months and we had a deadline that had to be met because we were hosting a wedding in our greenhouse (the greenhouse that didn’t exist yet) in October.

Tanner and I had been approved for a loan from Farm Credit Canada in early 2013 to build a beautiful Paul Boers “Herculon” gutter-connect greenhouse and two freestanding greenhouses.

We had decided from the very beginning that we would run our greenhouse year round (even though we are ornamental growers), and had come up with the idea of teaching courses and selling giftware through the winter to bring customers into our space. Our tagline was (is) learn, plant, grow.

Rumours were already swirling that the greenhouse was just that, a rumour, and I knew right away that we had to take control of our own story. I started a Facebook business page under the name of our new business and started documenting the construction.

Every few days, I’d snap pictures on my iPhone of the crew (who became more like family to us) from Imperial Greenhouse Construction and uploaded them to Facebook with a description of what we were doing. Instantly we watched the number of people following our feed climb. Within the summer, we reached an audience of 300 without growing or selling a single product.

At that moment, I understood the power of social media.

By November 2013, all the Christmas inventory had been delivered, labelled, priced, and set up but we still didn’t have any power. We opened our doors for the first time on Nov. 12, running three small generators for power. Our electricians were still busy at work and we were waiting for the power company to connect our lines but we had bills to pay and it was time for us to start selling the inventory we had bought.

A week later, our first shipment of poinsettias arrived.

In January 2014, a freak storm ripped through High Prairie with winds reaching over 120km/hour. The winds shook our freestanding greenhouses so hard it ripped out all the vent brackets and punctured holes in the new poly. In one freestanding greenhouse, the poly was ripped to shreds over the entire building.

We hadn’t even used the greenhouses and they were already destroyed. Luckily, we had greenhouse insurance.

In May 2014, the last bill for the installation of our furnaces and electrical work was paid. May was even busier and our sales were much higher then we had estimated.

Lessons learned: Even though we had a thorough business plan and detailed financial estimates (even adding on a percentage in each category for overages), we learned that things happen and you just have to roll with it. We took time each day to reset our minds when things may not have been going the way we wanted. Keeping a positive attitude is the greatest gift a person can give themselves – in the end things work out and often work out better.

I also learned that persistence is one of the keys to success. Every year has been better and better. If we hadn’t persisted through the hiccups as we were building, we wouldn’t be standing here today attempting to make what we do even greater.

Christie and Tanner Pollack are owners of Christie’s Gardens and Greenhouses, located near High Prairie, Alberta, one of the province’s newest garden centres. Christie was named one of this year’s Top 10 Under 40 award winners by Greenhouse Canada.

Related
Brighten your sales for spring
On the right track to retail success?
Wrapping Up Christmasworld
Serving Cottage Country