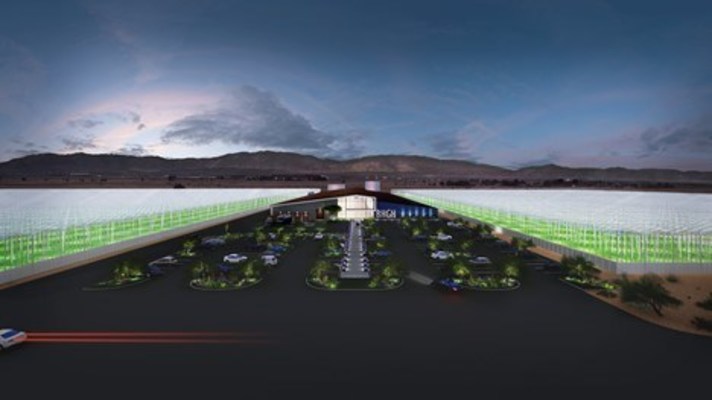 “Our controlled greenhouses will produce 3,000% more yield per acre than a traditional farm, will use 90% less water, require 90% less human handling and will be free from any herbicides,” said Ari Kashani, founder of BHGH.

A standard head of lettuce grown in the field consumes about 28 gallons of water from seed to harvest. In a greenhouse, the consumption drops to less than 2 gallons. The 62-acre BHGH Flagship facility will produce over 50 million pounds of fresh fruits and vegetables annually to be distributed to local and regional markets.

BHGH has worked closely with the city’s Planning Division to ensure that Lancaster’s standards for building efficient and sustainable structures were met.

“The project will bring hundreds of new construction jobs to the city, as well as over 200 permanent skilled jobs,” said Ari Kashani. “With an abundant source of natural light, dry manageable climates, excellent transportation linkages, and a strong, supportive local community, Lancaster is the ideal location to ensure highly productive and profitable operations. Lancaster was also strategically chosen for its proximity to a dense hyper-local population with over 24 million residents in Southern California alone.”

Today, over 60 per cent of vine crops consumed in the United States are imported from other countries. “There’s an increasing need to replace imports with domestically grown produce,” said Kashani.

California is one of the largest agricultural states in the country but increasingly faces climate and water challenges.

“For agriculture to remain a dominant industry, farming practices must leverage today’s technological advances. With the future of field farming becoming ever more uncertain, greenhouse agriculture is becoming more of a necessity,” said Kashani.