Tasty, elegant, eye-catching and pollinator-friendly; despite the challenging weather conditions, these varieties performed remarkably well, standing out among the many varieties trialled across three sites. 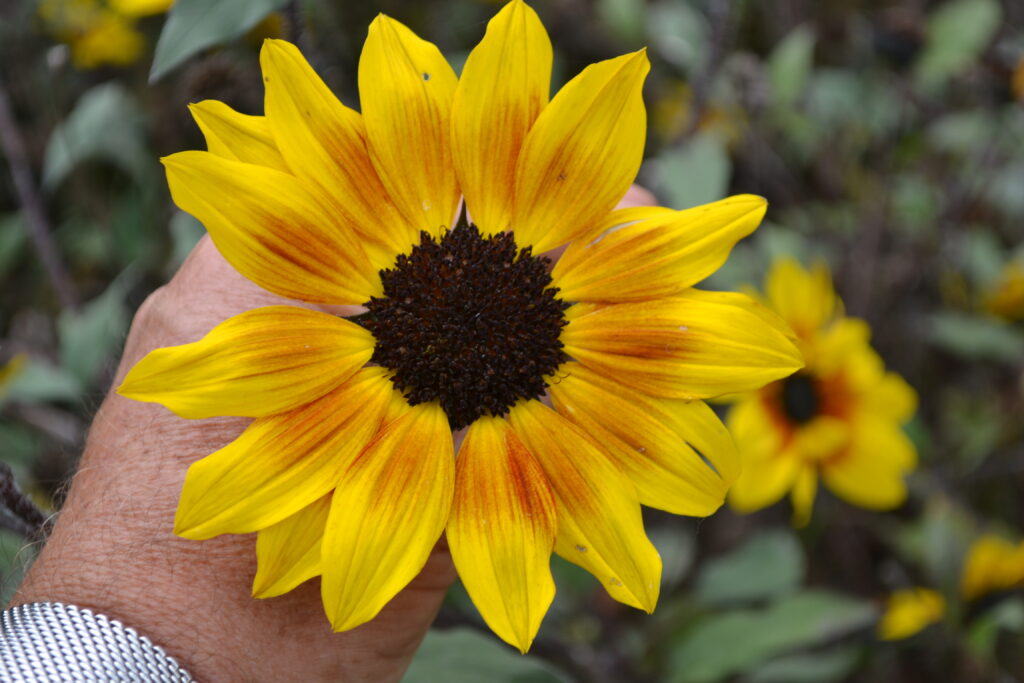 What do you remember of this past year’s growing season?

In my region of Ontario, I had a cold start to the planting season. A late frost damaged some of my post-May 24th plantings, followed by some very warm days over 30 °C. I also remember at least two periods with excessively high rainfall during the growing season. Recalling those wildly variable growing conditions presents a stark reminder of how our garden plants put up with a lot of uncertain weather and yet, are still expected to perform well in spite of it. The plants I am about to highlight did just that and were standouts to those judging and visiting the trials held at the University of Guelph, Landscape Ontario office and Royal Botanical Gardens in Ontario. 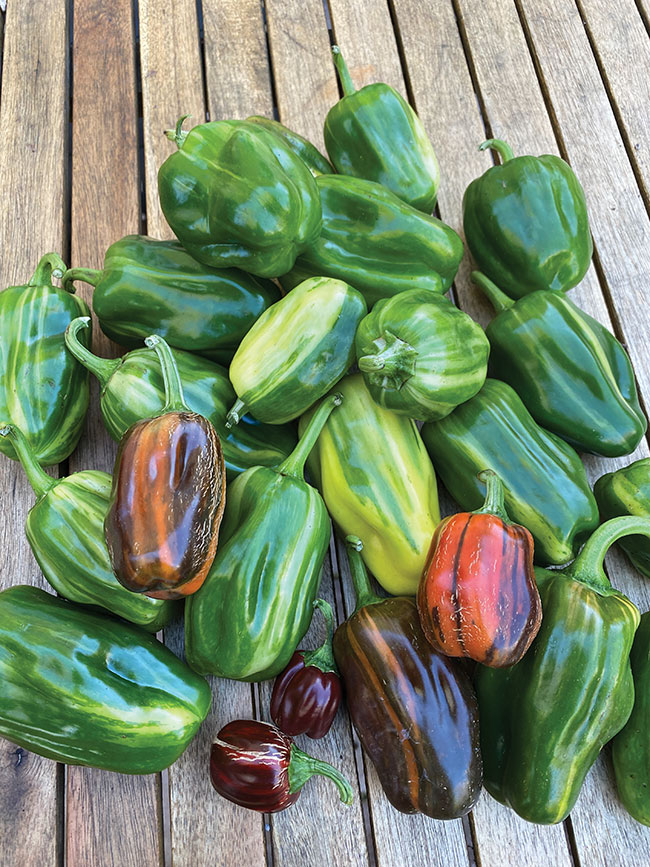 Dual-purpose plants with both ornamental and culinary applications are a desirable component of the small patio or urban garden where growing space is limited. Of the edibles trialled in 2021, two from PanAmerican Seed fit this dual role perfectly. The sweet pepper, Candy Cane Chocolate Cherry [1], has variegated foliage and fruit. While immature, the fruit displays a pattern of white and green striping. It maintains its patterning as it ripens, but the stripes darken to shades of rusty red and chocolate. Fruit size is small with lengths of 5-9 cm and diameters ranging from 4-6 cm. Plants in our trial reached heights of 60 cm. 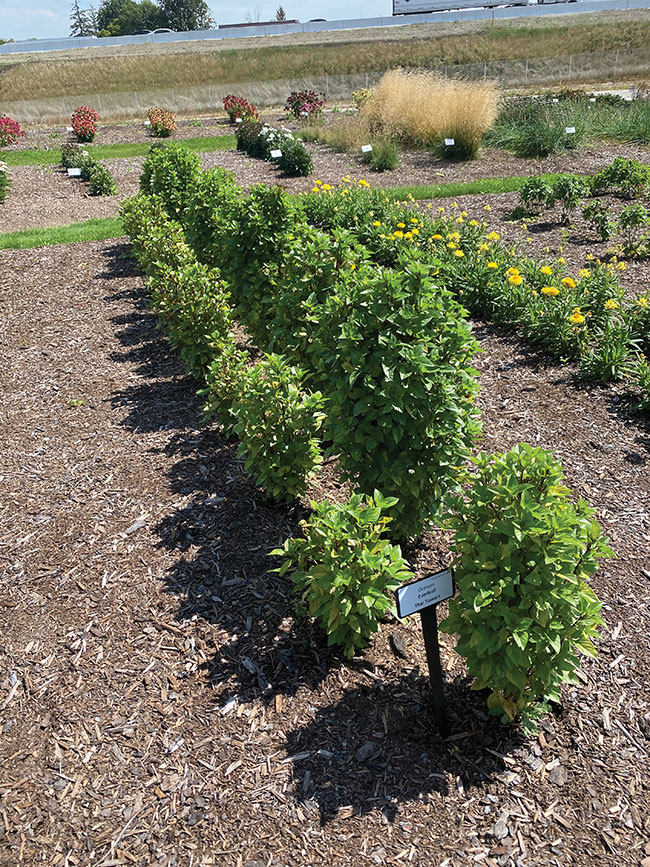 Basil Everleaf Thai Towers [2] is a sweet licorice-flavoured Thai-type basil. The green foliage contrasts well with its bronzy stems. The columnar growth habit produces tight internodes and dense foliage and works well in containers. In the ornamental landscape, it can act as a “formal-upright” addition to the garden, reaching heights of nearly 80 cm with a spread of roughly 30 cm. Like the previously introduced Everleaf Emerald Towers, Thai Towers is very slow to flower. Blooms started to appear in our trials in mid-to-late August; this lateness to bloom helps it maintain optimal basil flavouring and can extend the harvest season. 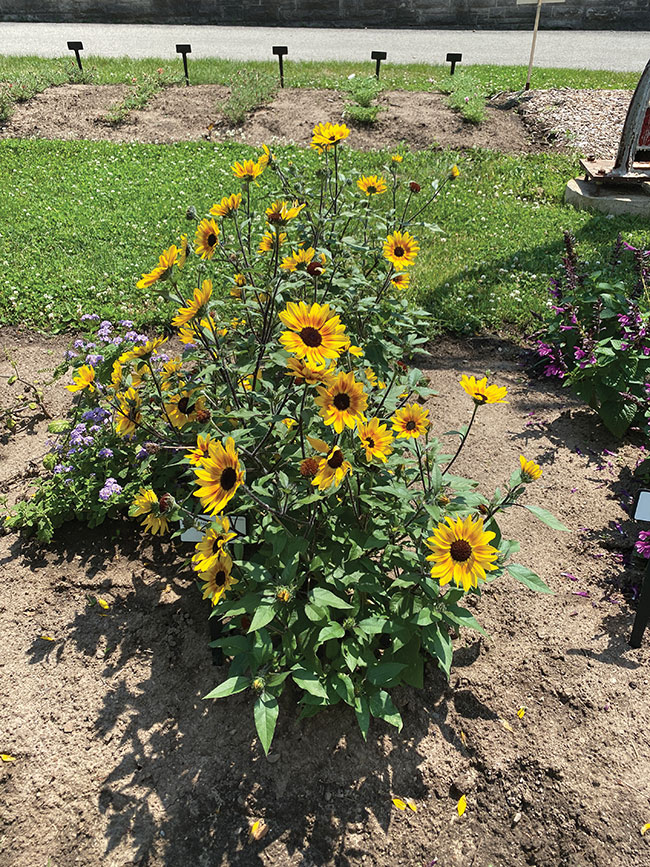 Helianthus ‘Suncredible Saturn’ [3] is the second “everblooming” sunflower from Proven Winners to enter the Guelph trial program. Blooming started in the greenhouse in mid-late May and extended until frost in October. In 2020, we had ‘Suncredible Yellow’ with its clear yellow ray florets and dark brown centre. A year later, a new colour for the series became available. Suncredible Saturn has stems of a reddish hue and yellow ray florets with a rusty base that combine to form a ring around the planetary eye of the flower. The flower diameter of the series is small (7-10 cm) and the overall growth habit of the plant is compact in both the landscape (~1m spread and height) and containers. The flowering stems worked well as cut flowers with a vase life in our trials of approximately two weeks. 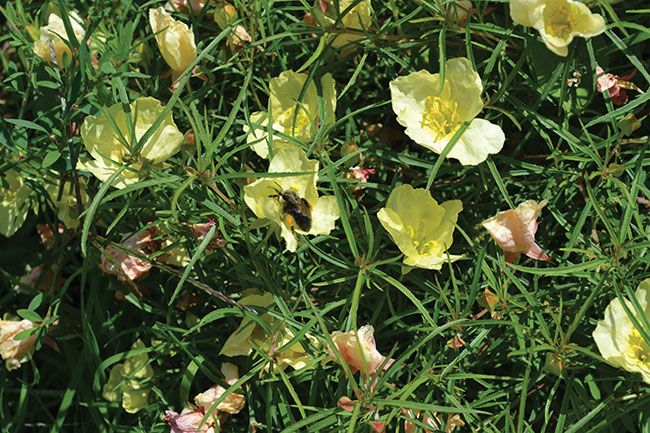 The genus Calylophus was new to me before this past summer. It is a native of Texas and is commonly called Texas primrose. We trialled two selections from Proven Winners’ Ladybird series: Ladybird Sunglow [4a] with deep yellow blooms and Ladybird Lemonade [4b] in pale yellow. 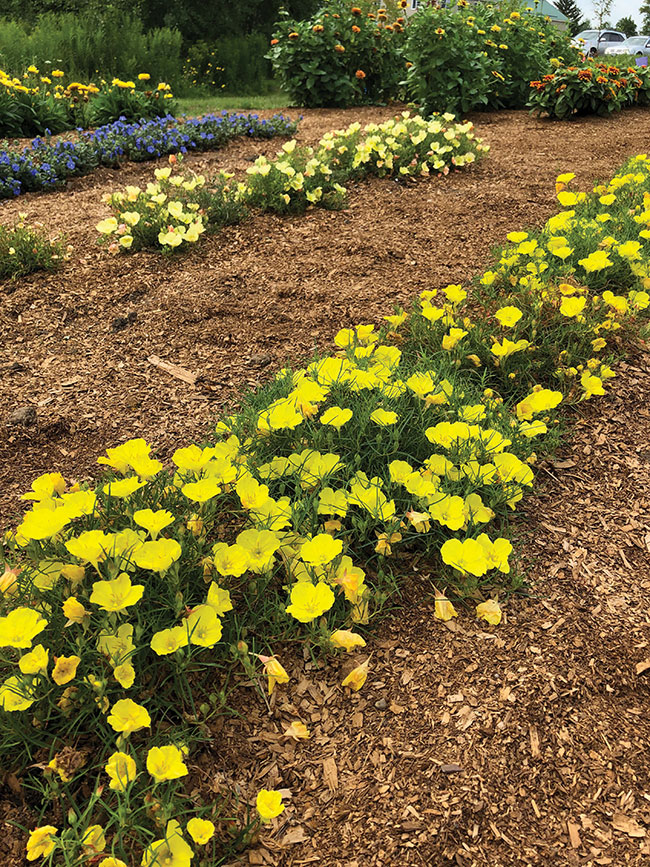 Blossom diameter was 4-6 cm. Garden height was approximately 25 cm with a spread ranging from 70-90 cm. These plants have fine foliage and a low spreading habit, acting as ground cover in the landscape and filler in containers. This series performed well in all the landscape and container conditions it was exposed to in the trial. It can handle frost and brief freezing periods which helps to extend the growing season until a killing frost.

It might be too simplistic to say that petunia breeding, in recent years, has trended towards producing smaller flowers while calibrachoa breeding has leaned towards larger ones, but sometimes one does wonder. 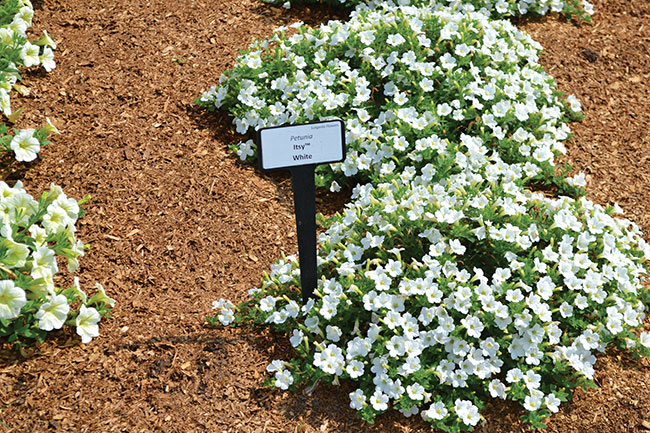 Last year, Syngenta Flowers released its petunia ‘Itsy Magenta.’ This year, ‘Itsy White’ [5] has been added to the lineup. With flower diameters of this series ranging between 1.5 and 2.5 cm, this was smaller or equal to most of the calibrachoa cultivars in our trial and appears to be unique in the commercial petunia world. Its petunia genetics allow it to grow well in the landscape and containers, unlike many calibrachoa cultivars that perform poorly in the higher pH soils such as those found in the Guelph area. In the landscape, Itsy had a compact, mounding growth habit, reaching heights of 20 cm and spreading to 85 cm by the end of the growing season. In mixed containers, it can be used where a small-flowered filler is desired. 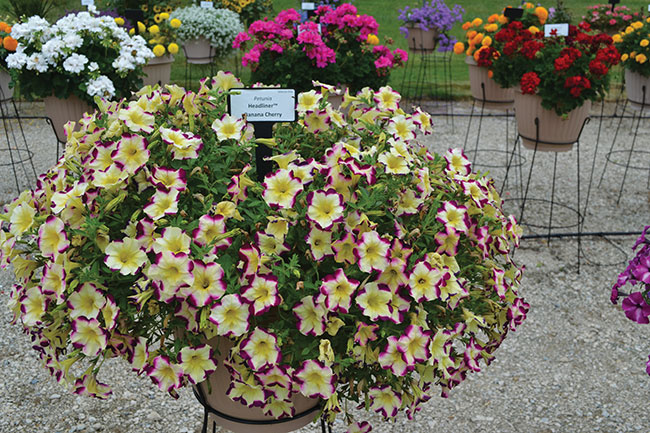 Differing from my previous observation on breeding trends, the petunia ‘Headliner Banana Cherry’ [6] from Selecta One does not have small blooms – it went in the other direction with bloom diameters ranging from 4-5.5 cm. This cultivar has unusual cherry purple edge markings surrounding the inner yellow of the blossom. The colours complement each other well. This selection grew well in both containers and the landscape, reaching heights of 27 cm and spreading to 80 cm by season’s end. 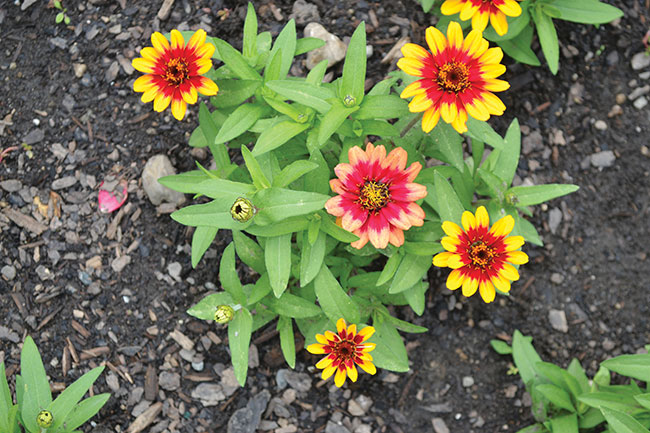 Profusion Red and Yellow Bicolor [7] is a unique bicoloured addition to this zinnia series from Sakata. It was first trialled in our gardens as an All-America Selections (AAS) entry in 2020. Ultimately, this entry earned an AAS Gold medal in recognition of its unusual bloom colouration. The flower opens with brilliant gold and deep red markings, aging into different shades of orange and pink. Like other members of this series, it is resistant to powdery mildew. Its compact, mounded habit reached heights of 35 cm. 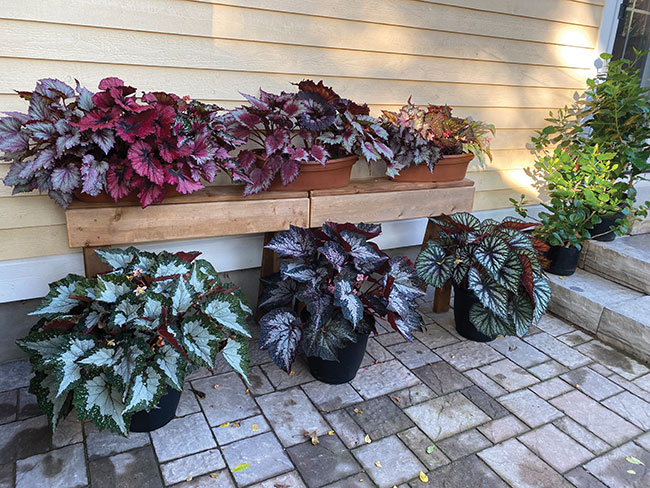 Rex Begonias have become my new favourite shade annual. In this 2021 trial season, we had 12 entries from four different series provided by Ball Ingenuity: three each from the Jurassic, Jurassic Jr., Dino and Megalo series [8]. As I write this, I can imagine the great marketing opportunities these names can offer the creative garden centre. Beyond the marketing angle, these names are very descriptive and indicative of the relative vigour of the different cultivars. A single plant from the Megalo series can easily fill a 10” container while the Dino selections may be better suited for 6” applications. Perhaps the showiest of the cultivars was Jurassic Heartbeat with its deep red foliage. Jurassic Pink Splash and Jurassic Jr. Purple Spec were judged most popular of the Rex begonias on open house day. 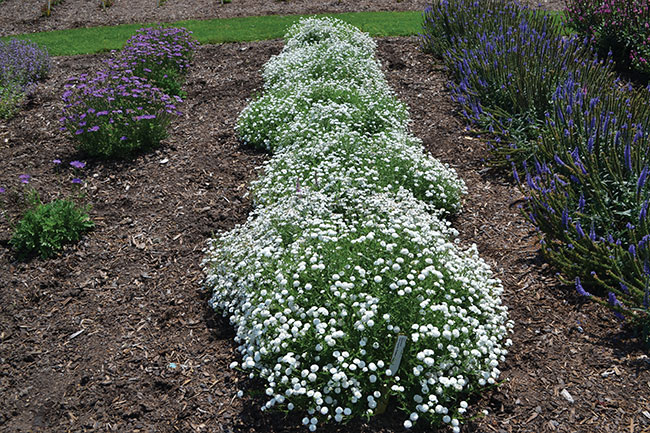 Achillea ptarmica ‘Marshmallow’ [9] is a new sneezewort from Benary. While this plant was entered into our perennial trial, what stood out was its uniform growth and early first-year blooming habit. This perennial falls into the category of “blooming like an annual” with blooms occurring on the greenhouse bench and extending through until frost. In the landscape, this plant reached heights of 35 cm and a spread of 60-70 cm during its first season. Most of the plants in the trial produced double flowers. Suitable as a filler in container applications and the edge of a perennial border. 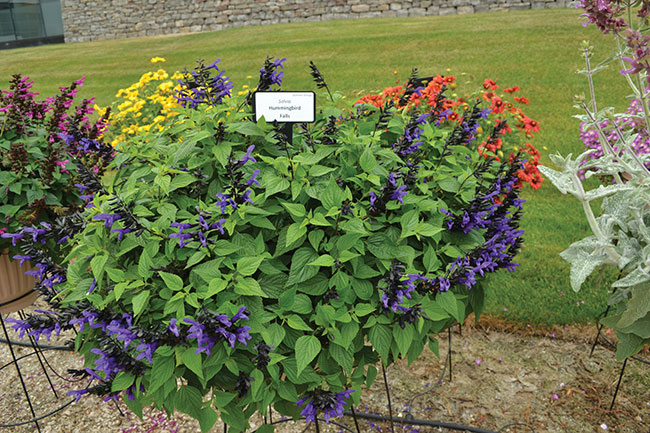 The new Salvia ‘Hummingbird Falls’ [10] is a guaranitica hybrid that has caught a lot of attention this season with its compact, semi-cascading habit. This growth habit makes it suitable for containers such as hanging baskets and planters, but also allows it to perform well in the garden in mass plantings. This species of salvia is well known for its attractiveness to hummingbirds. Chris Berg, marketing director at Dümmen Orange has commented on how this cultivar is uniquely suited to their growing collection of living hummingbird feeders. He asked, “Why not replace those artificial hummingbird feeders in our yards with something living?” (Cuphea ‘Hummingbird’s Lunch’ would be another choice for this application). At the Royal Botanical Gardens’ trial location, RGB staff observed the hummingbirds fighting over Hummingbird Falls’ blooms. In the landscape, we saw heights reach 70 cm with a plant spread of 120 cm by the end of the summer.

The 2021 season saw a move of the Guelph Trial Garden from the old Guelph Turfgrass Institute (GTI) to the new GTI location around the corner.The new site is on a slope and is slightly terraced. It has a different look and layout than the previous site but will continue to offer side-by-side trialling opportunities. While we were only able to have landscape trials for annuals up and running here for 2021, the plan is to return with container and perennial trials in the coming season.

Rodger Tschanz is the trial garden manager for the University of Guelph and Landscape Ontario. For more information about the trial plants and trial program, contact Rodger at rtschanz@uoguelph.ca